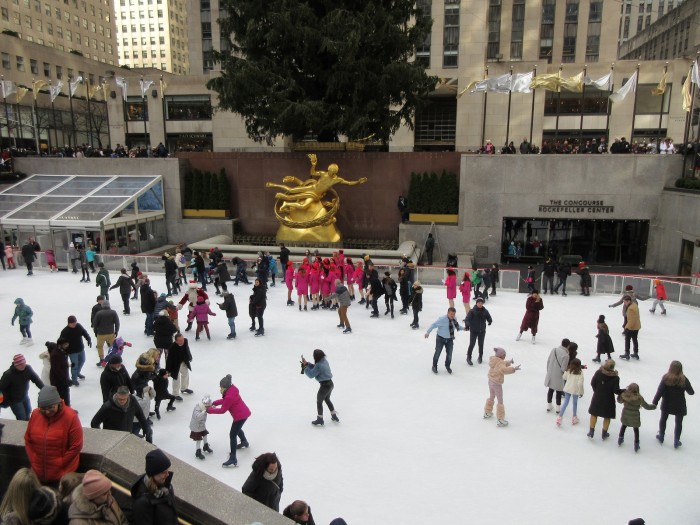 Right off the bat the title of this article is wrong. Pretty much none of what I write about will take part in Brooklyn. But for Thanksgiving I went down to visit my aunt and uncle who live in Brooklyn, and the rest of the family came up. Thanksgiving itself was pretty quiet and involved turkey and stuff, and then we stayed in New York for the weekend. On Friday and Saturday we went around and did tourist stuff. I’ve been in New York several times before, almost all those times to visit said aunt and uncle, but I think this is actually the longest amount of time I’ve ever spent in the city. I’m practically a native now.

The first thing we did on Friday was to head off to Rockefeller Center. Dad seems to like the place. He wanted to watch the ice skaters and the windows over at Sak’s across the street. So we did that. I think I would have rather gone shopping; I could use some new shoes. But whatever we watched the skaters. Those are the top photos. They were pretty neat I guess! There are other skating rinks in Manhattan with better views but I guess this one is significant or something. Sorry for being such a downer?

The single most exciting part of the day for me was St. Patrick’s Cathedral. Not for the cathedral. I don’t really care about Christian religious structures period, and as far as cathedrals go St. Patrick’s is pretty whatever. I’ve seen better. But I learned about the St. Killian’s candle burning system! This thing amazed me that it existed. The boxes of candles spread throughout the place proudly proclaim that it is patented. Patented candle burning system! The audacity! The appeal of the system is that it is low maintenance. All those little candle holder thingies have a hole in the bottom, so when the candle burns low enough it just drops through and the candle holder is ready to accept another candle. A huge think of wax builds up below, and a) I don’t understand how that never catches on fire and b) someone has to clean it but it must be easier than cleaning out individual candle holders, but that is the only drawback. I even contemplated donating $2 so I could light a candle (no one was guarding them I could have just lit one but it didn’t mean that much to me and if I want to affect the church’s finances I’ll advocate for them to pay taxes) but I decided to just google them later instead. So that was exciting. 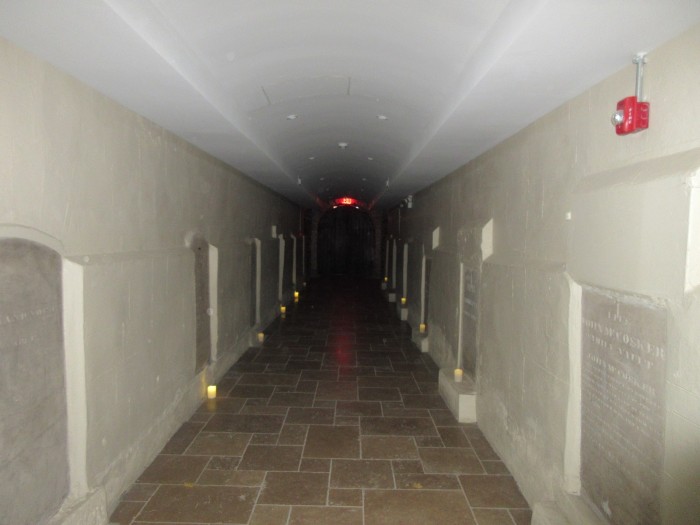 The second big adventure of the day was to go to St. Patrick’s cathedral. Wait didn’t I just say I was there?! I did indeed. I suppose the other St. Patrick’s isn’t a cathedral, it’s a basilica, but whatever. It is the original St. Patrick’s before the congregation decided they were cool enough to need a whole cathedral. The draw of this St. Patrick’s, besides being further downtown, is that it has catacombs that you can tour. The catacombs are mostly neat for being like, modern catacombs. The burials are not modern, but the place has been kept up and has modern ventilation and stuff (and lights, but the tour promises to be a “candlelit tour,” though the candles are electronic) and so represents what a catacombs would look like if you decided to build one anew. The tour was interesting but would have been better if it was one hour instead of two.

The final exciting thing was going up the One World Trade Center slash Freedom Tower. Plan A was to go up and watch the sunset from up there, but despite the elevator being blisteringly fast we didn’t get up there in time (plus our tickets were for too late) but still seeing Manhattan all lit up is pretty gorgeous. Eventually I figured out the “handheld night scene” mode on my camera but taking pictures through glass never helps. So we looked all around, admired a bunch of stuff, took some photos, bought a lapel pin (I got two lapel pins this day), went down, went home, and had burgers. Excellent times in New York.