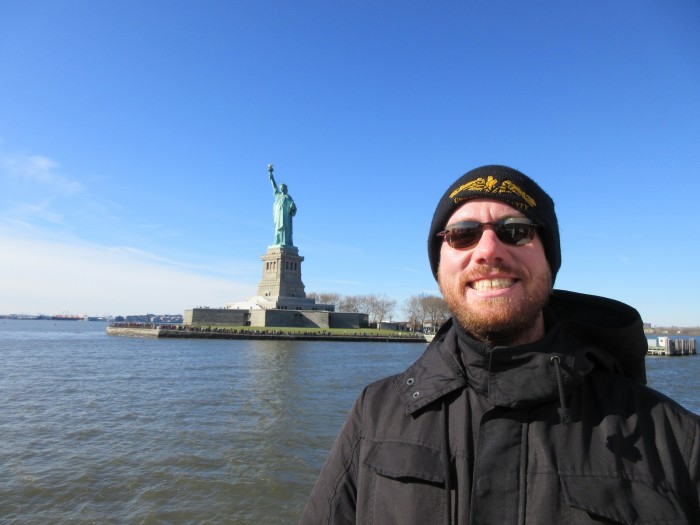 For our Saturday in New York, we went to the Statue of Liberty and Ellis Island. This was neat! For several reason: 1) I had never been to either of these things, 2) I got to take THREE!!!! boat rides, between THREE!!!! different islands, and 3) Freedom n’ shit.

Walking around Liberty Island is pretty cool. I’ll spare you the phenomenal number of pictures of the Statue of Liberty I took because there are better ones elsewhere (except for the one up top, the one just above, and the one later on, but those all have excuses), but please admire the one right above because it features a hawk or eagle or something perched right on Lady Lib’s finger there. I assume that the hawk is looking for terrorists or just admiring America. We didn’t get tickets to go up in the statue or even up on the pedestal, so we had to be happy simply admiring Liberty from afar. But that is fine because the island is lovely with excellent views of New York City, and has a museum and a pretty good gift shop. In the museum you find out all sorts of things, including the bewildering array of steps it took to actually construct the statue. They must have used an absolutely insane amount of plaster. 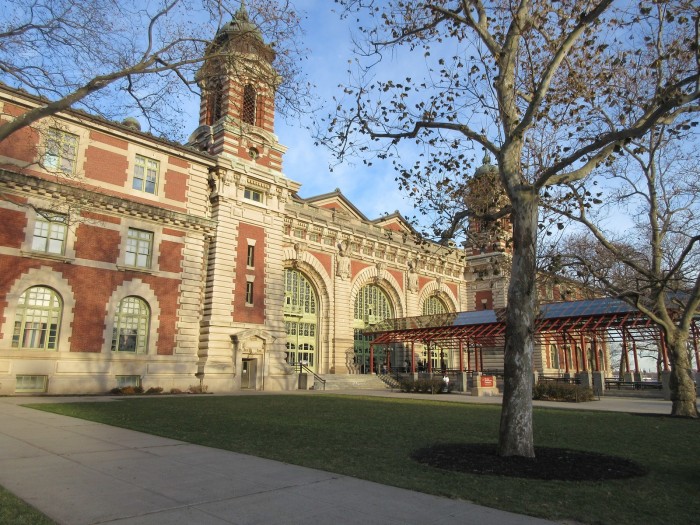 After you’ve had your fill of Liberty Island, the ferry takes you on the like four minute ride over to Ellis Island. This was pretty enlightening. I have heard about Ellis Island of course and like apparently 100 million other ‘mericans have ancestors that passed through there, but I didn’t quite realize how large the facility is. It is pretty impressive! Nor did I quite realize that most immigrants only spent like 2-5 hours there. I suppose it is significant because they all went there, but 2-5 hours ain’t that much time. But the whole island is massive and is built on landfill but the facility at its structural peak didn’t get used for too long I think, because by the post-WWII era we had other ways of screening immigrants. So that’s neat. We had spent so much time on Liberty Island that we didn’t have a super long time to spend on Ellis Island, but that is fine because unless you get the “hard hat” tour (we didn’t) there is only so much you can explore there. But the biggest advantage of being there so late in the day was:

The fact that the ferry ride back to NYC was at night and the whole city was lit up and there were fantastic views of everything! 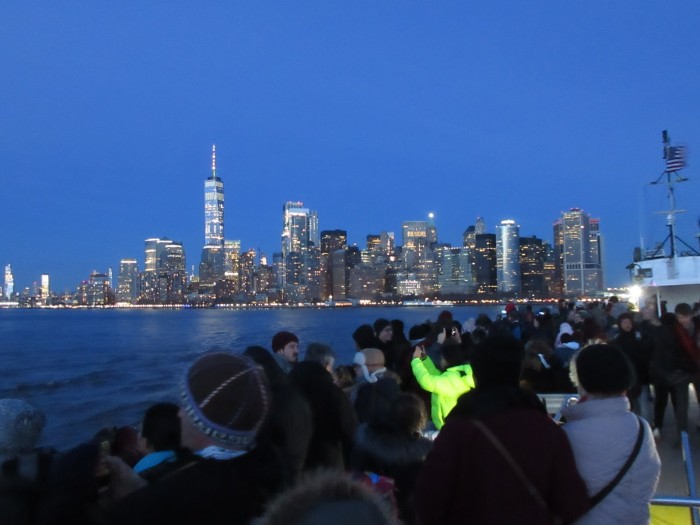 I had my own pictures that had exclusively the city lit up but I like this picture of all my fellow tourists flocking to take pictures because it has everyone just really appreciating how pretty everything looked. Given my druthers I think I’d rather be in the backcountry of Zambia or something but if you have to be in New England (I don’t actually think New York is New England but it’s all north of the Mason-Dixon line so who knows) this is a pretty place to be and the weather was pretty good if cold! Plus I got to contemplate America n’ shit for like the whole day which, you know, ‘Merica.