So I have moved to New Haven, CT, which I should talk about more, but that is for another time. Today I am talking about Powder Hill Dinosaur Park!

So it was Sunday afternoon and I was doing homework and it was super boring because it was homework. I was dying to go out and do something and the best thing I could think to do was to head up to this little dinosaur park I had read about. It’s about 20 miles up the road so I popped into my super-rad DeLorean and zoomed right on up there. On the way I drove through a pick-your-own orchard growing apples and peaches, which is cool because I didn’t know peaches could grow up here. I might have to plant a tree. If I can find somewhere to plant a tree, that is. 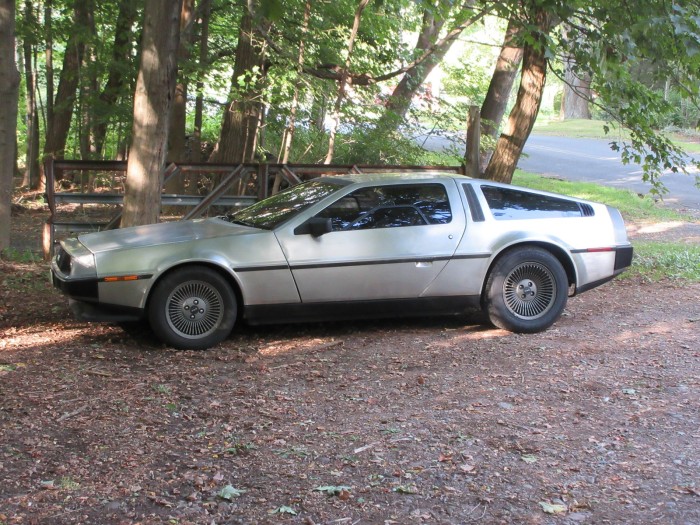 The park itself is apparently maintained by a local troop of Boy Scouts. It was owned by the Peabody Museum for a bit but then the museum gave it back to the town of Middlefield, and it’s pretty neat for any town to have a dinosaur park. The big (only) attraction of the park are some dinosaur tracks. The park itself is the little yard-sized thing right on the side of the road in a residential neighborhood. There’s a fence surrounding it and you can walk right in. According to the informative signs, the rock formation that now forms the park probably used to be the shore of a lake that dried up in the intervening epochs between us and the dinosaurs. The tracks are identified as belonging to Eubrontes giganteus which was a therapod. So there ya go.

There are a few tracks scattered around the site and they aren’t too stunning but I guess let’s see how I look in 200 million years. The above photo is the best one I got; it’s hard to make them out without better contrast of course. I walked around and found all the tracks I could and tried to imagine dinosaurs roaming the neighborhood. All in all pretty neat.

Having experienced history or whatever I bundled back up into my car and went home to do more homework. It made for a lovely hour (including the drive out there) and I am well satisfied with what I got for the price of admission (free).