Originally built in 1918! Still in use! Those brick towers are still exhaust towers!

I figured out the Central Power Plant (CPP) existed when I walked by it one day on my way back from yoga and I spotted some piping and a load-testing resistor bank. Some googling later I was utterly surprised to discover that Yale in fact has two of its own full-sized power plants, and some other smaller installations. I spent like an hour or two trying to find an email address, and a bit later the manager of the plant had agreed to take me and some other people I convinced to go on a tour. It was by far the best way to spend a Thursday morning I could think of.

What I was most surprised to learn when I first started looking into the plant is that it is cheaper and greener for Yale to produce its own electricity than buy from the grid. The CPP’s main source of power are two large 7.9MW gas turbines which usually run off natural gas but can run off of fuel oil in a pinch. These suckers are cogen units, so the waste heat from the turbines are used to boil water for steam heating and other steam uses, bringing the total thermal efficiency of the system up to an astounding 80%. Plus they have a very clean emissions system and when those bad boys were installed in 2016 the CPP had the strictest air permit in the state. You could hardly go greener without going nuclear (which I would be totally in favor of for the record).

The tour started in the conference room where the three of us on the tour chatted with Troy, the plant manager, for half an hour, geeking out about load shedding and steam loads and all sorts of that good good talk. Then we got going on the tour, hardhats, eyepro, and earpro in place. We started in the control room, where one dude can pretty much control everything in the facility. That’s quite a lot, because the CPP provides electrical power, steam heating, and chill water to nearly the entirety of the Yale Campus, excluding West Campus and the Medical Center. They are capable of going into “Island Mode” and running the whole shebang for about three days straight with the fuel oil they keep on site before they need to refuel. 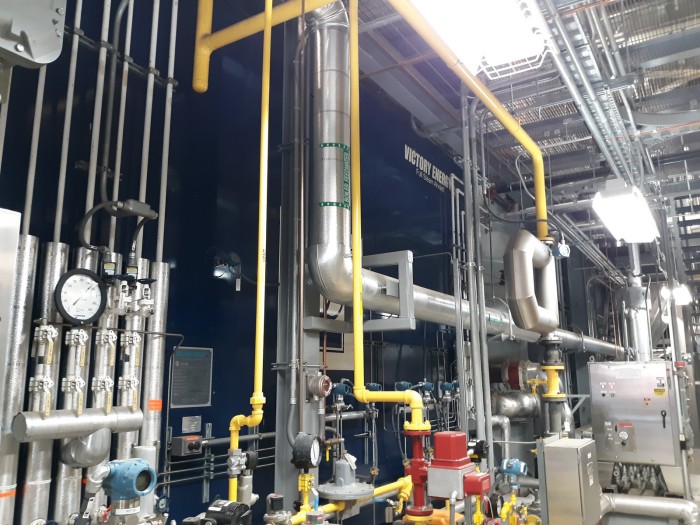 The two main cogen units (the turbines combined with the steam system) were massive units and still looked pretty much brand new. When we went by they were going full bore, producing about 15MW between them, but still the room was (fairly) quiet and you could barely tell there were two jet engines screaming on either side of us. I was particularly amused by the motto of Victory Energy, which was “Full Steam Ahead!” (as you can barely see in the photo above). The biggest reason I wanted to take other people on this tour is that people talk about energy policy and the like, but they don’t really know the actual infrastructure it takes to keep the lights on in even a small city. 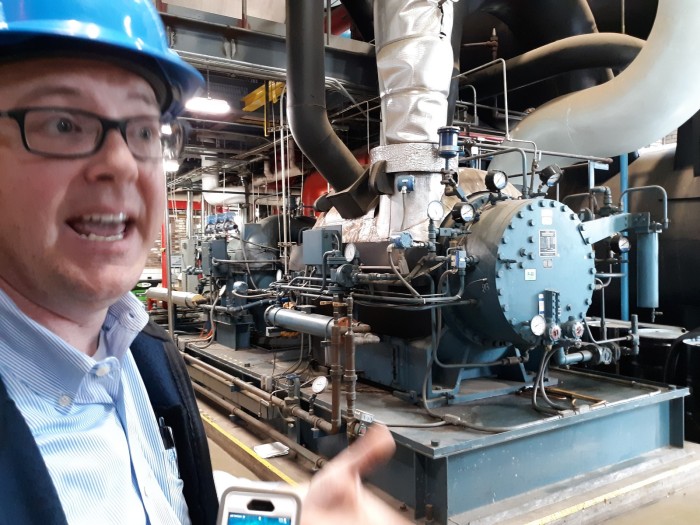 Personally, I thought the funnest part of the tour was seeing all the steam equipment. In the winter, they have a very clear need for steam in order to heat all the buildings on Yale Campus. But in the summer, they still produce a whole lot of steam with the cogen units in order to keep up efficiency and help control the exhaust heat from the system. As a result of all this steam they produce, all over the plant they have a bunch of random steam-powered equipment. They had a bunch of steam-powered pumps (usually with an electrical backup for when they need the steam), but the thing I went giddy over was the steam-powered chillers. I didn’t even know such a thing existed! Imagine! Steam-powered air conditioning! Troy was trying to explain the whole thing but I was just going gaga and taking tons of pictures with my phone. It was amazing.

We went top to bottom on the whole plant, from the condensate tanks in the basement to the cooling towers on the roof (great views), learning all about the systems they put in place to keep the place efficient and running smoothly. The tour ended with a look at the switchboards, where they actually distribute the electricity to Yale’s campus. They’re not allowed to put power back into the grid, so they’re always drawing about half a MW and have the grid on-line of course to provide backup power to their plants. And like I said, in the event of a grid outage, they’ll automatically go into “island mode” to keep supplying power to critical Yale systems like science experiments or heating/cooling for the dorms. It was such a fantastic tour and Troy was a fantastic host and it was nice to be able to talk about how we actually go about keeping the lights on. I can tell you after Zambia that people take for granted the infrastructure that keeps us warm and fed until you don’t have it, and it’s a great learning experience to see what it actually takes to keep it going.