Joe Biden is a man I am increasingly excited to vote for this fall. He was not my favorite during the primary, mostly because he was an old boring white guy. But his political talent is of course tacking to wherever the party is going, and the party is going left. It wasn’t until he started announcing his policies, however, that I finally came to appreciate the power of an old white guy to make things seem boring. The dude more or less adopted the Green New Deal whole cloth (okay, not quite, but like, mostly), and I don’t think there was much of a reaction! So I am excited to hopefully see the man lead the country into the most progressive era the country has ever seen, and see people mostly shrug it off for being obvious and commonsense (which it is, but I guess we needed an old white guy to tell us that).

Most politicians wear boring ties and boring clothes. Biden isn’t in the picture up top, but that picture does have a whole bunch of other politicians wearing boring things. The women are wearing the most exciting things, but even then the most exciting we get is Tulsi Gabbard with a red jacket over black pants and a black blouse with black shoes. The men all wear blue, and half of them wear a blue tie with it, one an aquamarine (?) tie, then one purple and one red tie. I think this is partially the fault of television, because a CRT television doesn’t mix well with stripes and radical colors can look weird on an improperly tuned screen, but also because politicians are never trying to seem too radical to begin with. So they wear boring clothes.

Joe Biden, for all his aviator glasses flair, is like any other politician and well within the bounds of generally boring dress. Here he is wearing a plain blue tie, for example: 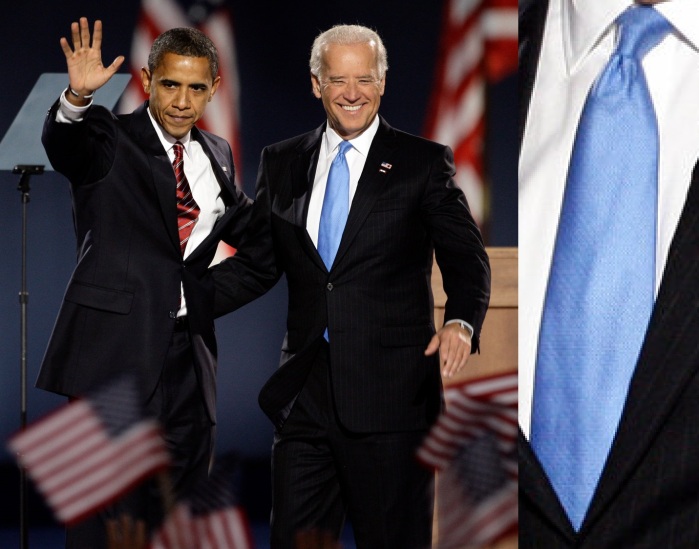 But then, there I was, reading the New York Times to make John Kerry proud, when I came across this article which featured at the top the below image. I thought to myself, huh, that’s an interesting pattern for a tie, not the normal boring tie you see politicians wear: 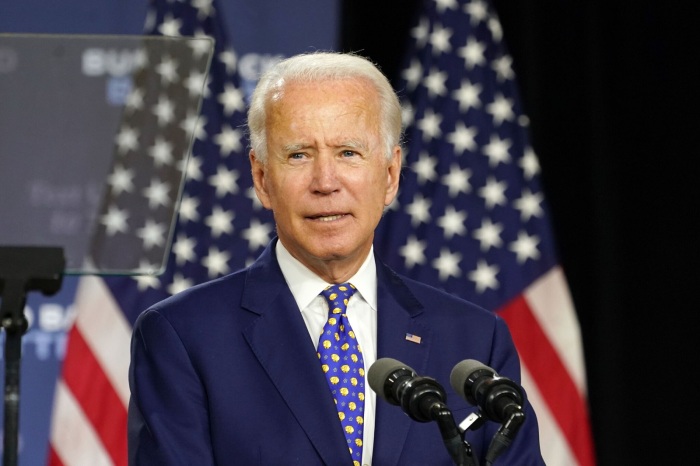 So I opened up the image in a new tab, and I zoomed in. Do you know what I saw???

That’s right I saw little sheep! Joe Biden was wearing a sheep tie, for no discernible reason except maybe that he liked sheep! This wasn’t a speech at a sheep industry event, this was just Joe Biden giving a normal speech, wearing a sheep tie! I had to know more, so I launched a brief investigation of Joe Biden’s ties (somewhat for my own benefit, but mostly for my super amazing girlfriend, who wants this talked about more).

Turns out, for a politician, Joe Biden has a nice little range of ties. Below, he is showing his patriotism by matching an American flag lapel pin (I hate those; politicians could do so much with their lapel but they all do the same boring thing) with a rep tie with American stripes: 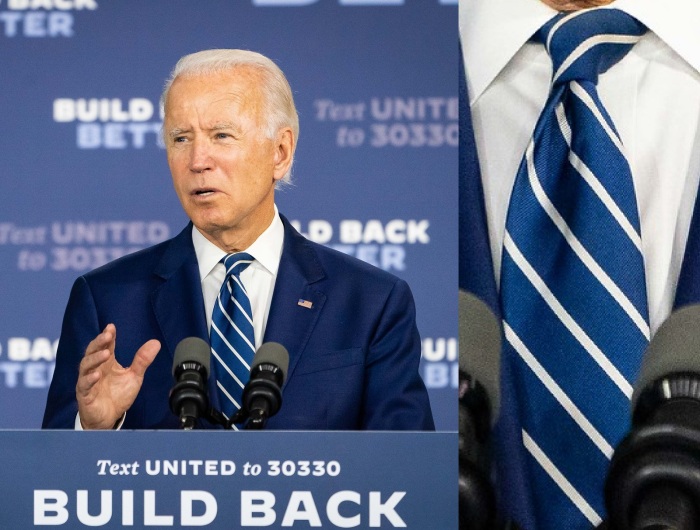 But in a nod to the importance of diplomacy, and the future work he will do to restore America’s diplomatic ties (get it?) with the world, here we see him with a European-striped tie: 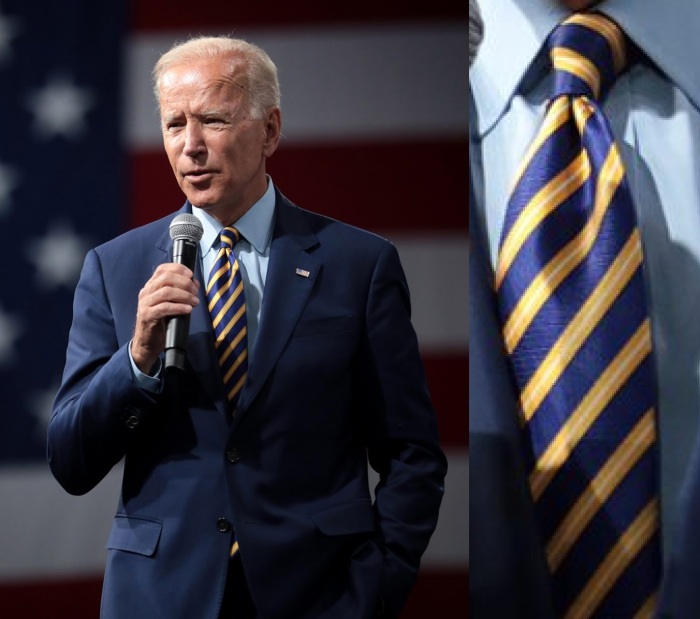 But he does have some swagger! Below is a tie that I initially interpreted as having the Vice Presidential Seal on it, but now which I think is simply the Great Seal, which, hell yeah, ‘Merica: 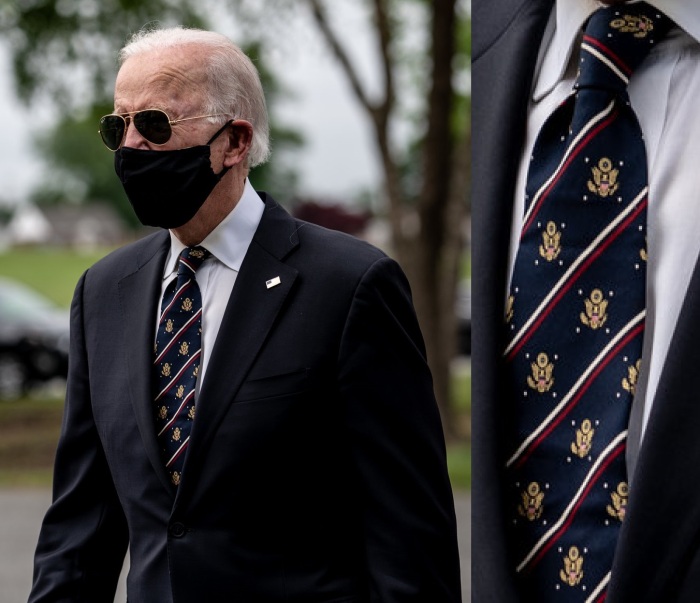 What initially got us on this path was a tie with cute animals on it, and so to cute animals we return. Below is a picture of a serious-looking Joe Biden sporting a tie with a donkey motif on it, which, hey, very on-brand for a Democrat, rock on: 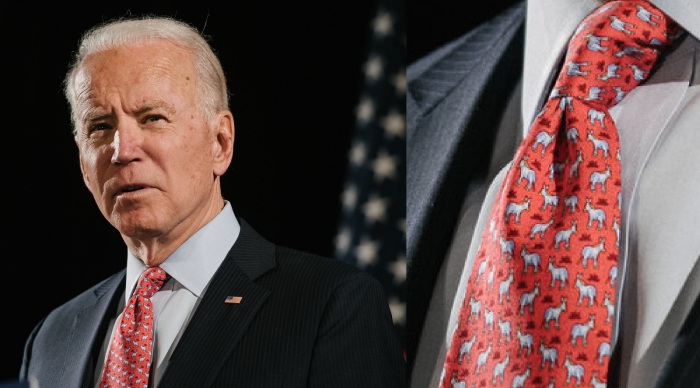 But let me tell you, I have saved the best for last!!!!! Below is a picture of the person who, for the sake of our country, we desperately hope is the next President of the United States, saying presumably important things in front of both Chinese and American flags, while wearing, for absolutely no reason I can think of, a tie with little turtles on it! 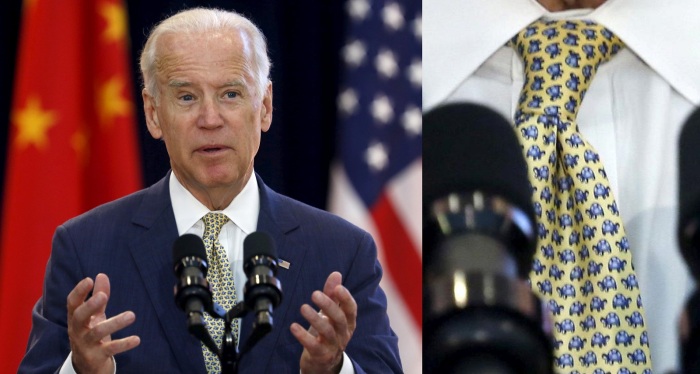 Please vote this fall, and please vote for every Democrat you can.

Update: not ties, but close.