Inspired by spotting that YP last week, I thought I would spend some time writing about them this week. YPs (technically short for “Yard Patrol,” Wikipedia, US Navy) are 110 foot long boats that are more or less designed to be a standard boat. Their purpose in life is for midshipmen to practice driving ships without having to like, go through all the time and expense of driving a destroyer around. Plus they’re smaller, so they fit in the Severn River a lot more nicely. They have two propellers and two diesel engines and a bridge and lookout stands and you can take ’em out and practice driving them around.

Every midshipman has some interaction with YPs. If you ask me, they should put a lot more effort into training midshipmen into surface warfare officers (SWOs), but nobody asks me. But you do things like seamanship classes and the like, and the practice evolutions for these classes are going out on YPs and driving them around. Some midshipmen interact with them even more and go on summer cruises on them for training. And then some midshipmen, some midshipmen are on the YP squadron.

Some YPs from above.

For my first three years at the Naval Academy, I had less interaction than most with Yard Patrol craft. I was on the sailing team, you see, and we had a particular disdain for YPs. Why motor around on a YP, practicing going in straight lines and then turning on command, when you can sail around on the sleek, clean lines of a sailboat? But then halfway through my 2/C (junior) year, I decided to quit the sailing team when they wouldn’t give me a slot on a donated boat. Everyone at the Naval Academy is required to do a sport, and for that spring semester I was on my company’s intramural basketball team.

Senior year, however, I had come to miss my days on the water with the sailing team, and chose instead for my sport to do… YPs. I joined the YP Squadron, mentioned above. So this is wild. Like I just said, everyone at the Naval Academy is required to do a sport. Everyone. But one of the “sports” you can choose is to join the YP Squadron. What is wild is that it counts as a sport. What the YP squadron does is go out on Tuesday and Thursday afternoons and drive YPs. This mostly involves different people standing around in different, discreet spots, and maybe moving their hands or something and then saying things to each other. Absolutely wild that is a sport, but that is the sport I chose so I could get out on the water again. 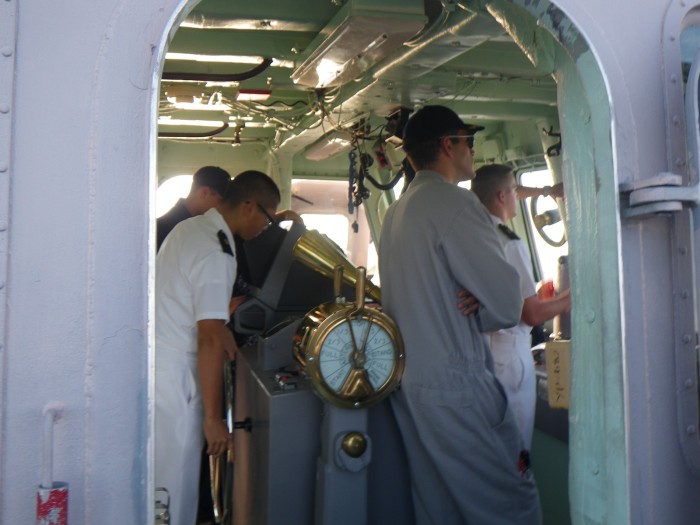 Looking into the bridge from the starboard bridgewing.

The Naval Academy, as far as I could tell from my time there, does not have a chess team. It was my opinion that all the people that would have joined the chess team instead joined the YP squadron. You had to be a special kind of nerd to do this. What you practice on the YP squadron is standard commands and docking and undocking boats and then like, navigation. All of which I love, but YP squadron is your sport, so you had to love it more than like, playing dodgeball. Rare breed at the Naval Academy indeed, despite what you’d think. The YP squadron actually gets a fair number of Plebes to sign up every year, because over Plebe Summer the squadron gives them a talk about how amazing and awesome it is and Plebes sign up, not knowing better. 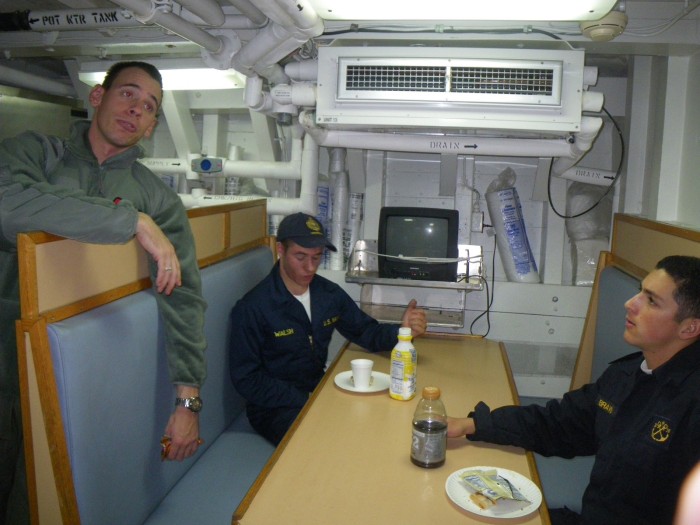 Down in the galley, with our zoomie on the left.

The squadron itself is in a lot of ways pretty bonkers. If you’re an officer at the Naval Academy, and you just love SWO stuff, you try to help out with the YP squadron. The squadron also attracted the exchange officers. The British guys were always a special kind of crazy because they have a longer naval tradition, and their deck officers are just deck officers; they don’t tend to do engineering stuff too like American officers. So they are fanatical about navigation and try to instill this fanaticism on the YP squadron members. I don’t know if it worked but it was fun to watch. When I was there, the squadron also managed to attract an exchange cadet from the Air Force Academy. I guess he just wanted the full experience. If I didn’t care much about what we did, the zoomie really didn’t. Plus one time we toured a destroyer and he kept calling it a “boat,” much to the annoyance of the officer showing us around, and that was funny.

I actually had a great time on the YP squadron. I was a 1/C (senior) at the time, so no one really like, tried to tell me what to do. And you got to be on the water twice a week, which was fun. And no one got too mad if I just missed it (I actually had a chemistry lab scheduled concurrently, but it usually ended early). I actually did love navigation, and was pretty good at it, so I spent most every afternoon with the YP squadron taking one of the hapless plebes and teaching them navigation, which was relatively undemanding and pretty rewarding. I hope there are navigators out there who might not remember but at least picked up a practical tip or two before their navigation class. Plus it was nice just being out on the water.

Where other sports go to competitions or whatever, the YP squadron went on MOs (Movement Orders). That is, we would just drive the boats somewhere. This was usually pretty neat, because navigating the boats around was fun, and you got some good parking spots. When we went to Norfolk we parked right next to the Wisconsin, and when we went to Baltimore we parked right in front of the aquarium. The squadron also went to the Army-Navy game in Philly, which compared to the bus is a pretty luxurious way to travel. Then we parked next to the Olympia.

Dad at the helm.

The trip to the Army-Navy game was especially fun because on the way back I got to bring dad. Turns out dear ole’ dad was actually commodore of the YP squadron back when he was a Mid, cementing him as an absolute bonkers NERD. But he had YP experience, and I asked nice, and he got to come with us on the way back down. I told him to not miss our underway time, and he was diligently waiting in the mess decks on the ship before the sun came up and before anyone was even awake. He spent some time at the helm while I was driving (standing officer of the deck), so I was ordering him around and that was fun. He tried to be chill about it all but he had a grand time, even digging up and busting out his old deck jacket from when he was driving destroyers around.

All in all my time on the squadron was absolutely great. For a professional writing/communications class my senior year, I even made a poster that was meant to promote the YP squadron, depicting some Mid on a lookout post looking patriotic (pictured above). I was hesitant to go to the YP Squadron annual dinner, feeling a bit like an interloper, but due to all the Plebes being underage and the organizers accidentally ordering too much toasting port, we had a great time talking YPs long into the (Tuesday) night. So I stand by my opinion that the YP squadron are all nerds, but for a bit… they were my nerds.