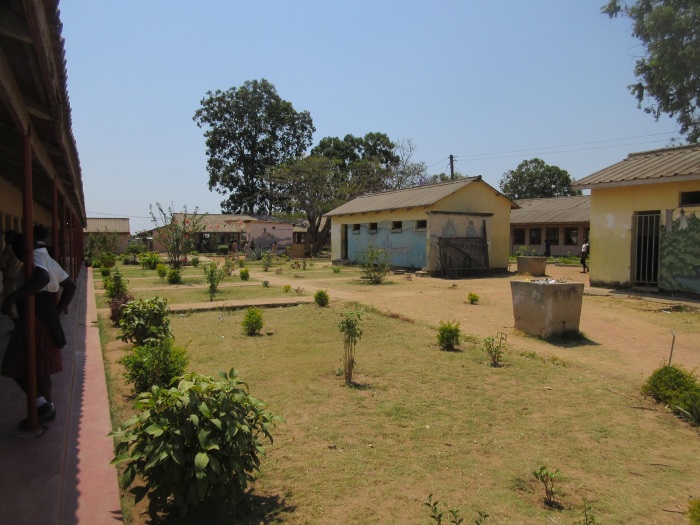 A school I visited in Zambia.

I was supposed to be in Kenya this week for a school project, but COVID-19 put a damper on those plans. So in search of content I wanted to share some thoughts on a sort of pet notion of mine: the effect of school busses on education.

I am more or less obsessed with the notion that the key to all development is building good roads. This of course comes from my experiences in Zambia, where the village I lived in, while only 12km away from Mbala, was connected to the town only via an absolutely terrible dirt road that took a 4×4 a hour to travel down. That, combined with the education I saw in Zambia, got me thinking about busses.

I think busses are a little-sung hero of public education (not entirely; there appears to be a globe-spanning school bus industry that does its best to trumpet its advantages). I didn’t have to think about them much until I had to think about the implications of living without them. In Zambia I don’t think I saw any school busses. I would see a bus for the nursing school driving around, and one time I wound up on a bus that was almost entirely chartered by a girl’s boarding school that was sending a chunk of students back to Mbala, but as far as I know there aren’t any examples of dedicated public transportation for schools. The upswing of that is that kids have to walk to school. That by itself is good and fine; kids should of course be expected to walk to school uphill both ways in the snow. But what it means is that you wind up having schools every 5-10km or so, so that kids are able to walk to school in under an hour (people at a fairly brisk pace walk about 5km an hour). An hour walk doesn’t sound too bad, until you do it every day both ways in the hot African sun without shoes.

The upswing of having schools every 5-10km is that they have to be small. If the country has so many teachers, and those teachers are going to be split up among so many schools, then the more schools you have the fewer each school gets. One school near me had only one teacher who was teaching, or at least trying to teach, 150 students. So this, I think, is one of the big advantages of busses: they let you consolidate schools. That would allow you to pool resources in a lot of better ways. Teachers could specialize in just one subject or just one grade, which I think could improve teaching. These schools I am talking about are mostly primary schools, which covered grades 1-7. Back in my elementary school, we had one teacher that taught most every subject which I think is normal, but we were able to have a dedicated art teacher and a dedicated computer lab. In Zambia computers are part of the school curriculum, but there is no way these tiny schools would have the resources to maintain a computer. In a more consolidated school, I think you could  manage to have something like that. You might even be able to have a dedicated administrative staff, which would be a boon. In the school with the lone teacher, whenever he needed to talk to the school district office he had to go into town which cost a whole day of instruction.

School busses would also provide a lot more school access. It is sustainable, if less than ideal, to have a whole bunch of primary schools spread around rural areas. But for secondary schools, the curriculum there requires dedicated science teachers and the like. So by necessity (and, unfortunately, demand), there were a far smaller number of secondary schools. The closest secondary school to my village was in Mbala, which like I said is 12km away. This was generally a 2.5-3 hour walk, which is more or less impossible to do every single day if you’re a high school student. The upswing is that secondary schools in Zambia tended to be boarding schools, though if you lived near enough you could of course just be a day student. But boarding schools were necessarily more expensive, and so out of reach of the vast majority of students. If there were school busses that could take students to school, far more students would have access to education.

I tried to find articles and research that could help me determine the exact effects that school busses had on education. I couldn’t find a whole lot that was specifically about busses (I did come across this article, which I think explains my own academic success), so I tried to find research about school size. Turns out there are a lot of articles in that vein, mostly it seems tied to the small schools movement. The general theme in these articles is that smaller schools provide more access to teachers and community, which is good and excellent. An interesting insight in this article is that larger schools are favored by governments because they tend to be cheaper to run. In the context of Zambia, the education system is already pretty dismal due to a lack of budget, so I think that if larger schools are cheaper this could be a major advantage, despite a potential reduction in community, if it means that more students have access to education at all. One newspaper article from 1988 was in line with my thinking, pointing to research that said students in bigger high schools did better because they got to enroll in the more specialized and advanced classes that those schools were able to support.

I would like to see more research on the exact impacts that bussing can have on student’s education, especially with regards to access to education and the effect on schooling. That might be another arrow in the quiver of arguments for why roads are so awesome, because it would be hard or impossible to have busses without an adequate road network. Of course, it might be out of reach anyways; not only would you have to build a whole road network, but according to one article bussing in the United States costs about $500 per pupil per year. In Zambia in 2018, the government was able to allocate about $200 per pupil total for education. There is lots and lots of work to do to make sure every kid can get a quality education.