For these past two weeks I have been building a chicken coop. It all started when a chicken decided she lived in my house. One night she walked in like she owned the place and took residence in my chicken. I didn’t mind that until the next morning, when I discovered a bunch of chicken poop in my kitchen. This was clearly unacceptable, so something had to be done. First, I named her Susan, and second, I decided to build a chicken coop.

Susan, sneaking into the house.

Most of the time when I build things with sticks they wind up kinda low-quality, but given the importance of this project to Susan I decided to make it as high-caliber as I could. The first step was heading off into the forest and gathering supplies, ie, a whole bunch of sticks. This inevitably involves chopping down trees, which I feel terrible about, and to assuage my guilt I donated $50 to Trees for the Future (I’m trying to plant trees myself, but so far with my pollipot tree nursery I am 1/25 in getting the things to sprout). 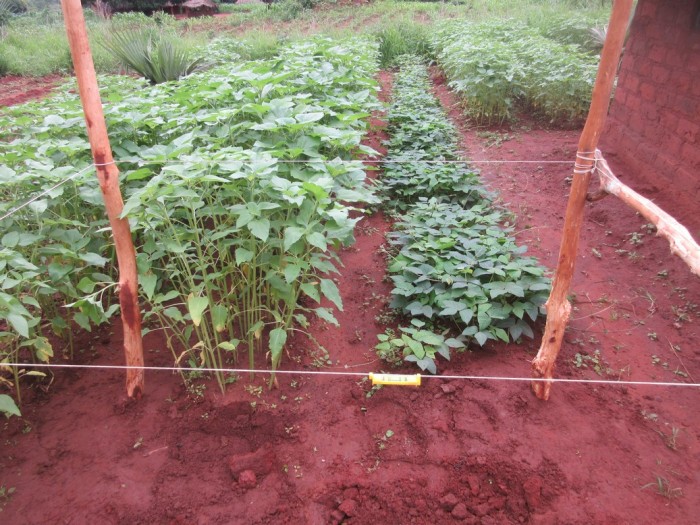 After I had the necessary sticks, I cleared out a little spot next to my house (had to move some of the sunflowers to do it) and planted the first four poles in the ground. I decided to make the coop 1m x 1.5m, which should be sufficient room for up to 10 chickens, but I’m thinking I’ll get like four. Borrowing some techniques from pond staking, I used my line level to make sure that the floor was nice and level for the chickens.

The basic design of the coop is pretty simple. I just imagined it being a night shelter, so the major piece of “furniture” in the thing is a perch for them to sleep on. That is the pole going across the middle there. One of the most time-consuming portions of the work was stripping the bark off of all the sticks. Parasites and other bugs that bother the chickens can hide in the bark of the wood (along with making it more prone to attack by termites), so it is necessary to strip it all off. That takes time, however. As a side note, I am still sorta consistently amazed that you can get wood from a tree. Like, who’da thunk? 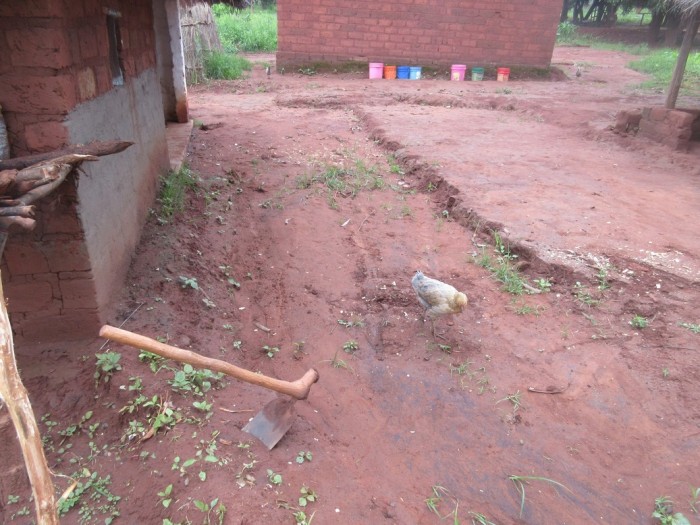 The whole process took me about two weeks off and on, with pretty much daily trips into the forest to gather more sticks (whenever I am gathering sticks for these projects, I always find myself briefly worrying if using dissimilar woods is going to cause corrosion problems down the line). Susan would come by and inspect the work as it was going along. The chickens also really like it when I move dirt around, because it digs up bugs for them to eat.

Once I had the frame of the chicken coop in place, I covered it with a tarp. The tarp was a relatively cheap and available building material, as opposed to getting bamboo from the next village over or finding enough sticks to block the wind and rain. In most of the projects I do using free village-appropriate materials is a priority so they can be used as an example to the farmers I work with. In this project, however, my neighbors already have chicken coops of their own made out of a variety of materials, so they don’t need me to show them how it is done. They use a wide variety of materials, and I’ve seen designs use bamboo, sticks, and grass, and I’ve even seen a few that construct a small brick coop on top of a wooden platform. 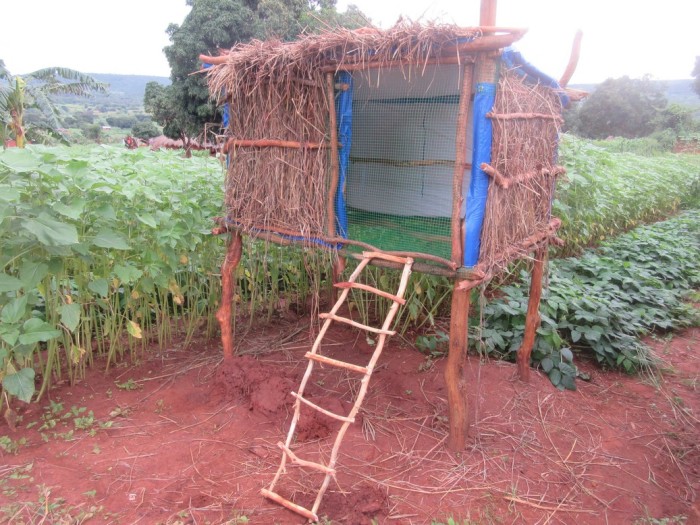 After nailing the tarp onto the frame, I covered the tarp with grass. The grass serves mostly to protect the tarp from the sun, and also to make the thing blend into the surroundings a bit more and appeal to my own aesthetic sense. I wish I had been able to cover up the blue tarp a bit better but that would have required more sticks and engineering I was unwilling to implement. The floor of the chicken coop is wire mesh that I had originally intended to use on a rabbit hutch that I’ve never gotten around to building. At the tops of the sides there are also mesh windows. The mesh on the floor is intended to make cleaning the coop easy, and also make it easy to collect chicken manure for use in the ponds or my gardens. The windows at the top, along with the floor, are there to provide adequate ventilation. The door is also mesh, and hangs down from the frame in the front. Once I get chickens, I’ll keep them cooped up at night, and let them roam free during the day. I’ll be providing supplemental feed and making sure they have a consistent source of water. Hopefully if they lay eggs fairly consistently I will have a regular supply of eggs to use in meals and baking.

So that’s my chicken coop. It was a fun project to build and now I guess I’m obligated to get chickens. I’ll let you know how that goes.