So I set off into the great unknown! Here I was! Patty Weeds! Adventurer! Now with that exciting intro, time for more geography. The Nan Madol ruins are on the eastern side of Temwen Island, which is off the southeast corner of the mainland and earns its island status due to a small (10′ wide) channel crossed by the Temwen causeway. The MERIP facility is shortly before the Temwen causeway and the causeway is on the opposite side of the island as the ruins. So to get to the ruins I had to kayak around the island. It is largely a very lovely kayak trip. It was a bit choppy at first, but as I got into the lee of the island and in the mangrove swamp it was smooth paddling. The current was too strong through the 10′ channel for me to paddle through, but a nice man who happened to be fishing helped me haul my kayak over the causeway. The paddling took me about an hour, but I am not exactly in paddling shape, and I stuck a little too close to land, leading to several groundings. It was a nice illustration of how a mangrove swamp reclaims land and helps cement the shoreline of an island, but not a good illustration of boatsmanship, which I was embarrassed about. The paddle features views of the ocean and mountains and mangrove islands (I’m always somewhat bewildered that mangoes don’t grow on mangroves) and dizzying array of bird and aquatic life.

Eventually I made it. Reconstructing the event later, I managed to paddle right past the entire southern edge of the seawall of Nan Madol (obscured, as it was, by mangroves) and eventually landed at the southeast corner. I had turned a corner and this time was faced with ocean & reef instead of mangrove. I looked up and to my well-trained seaman’s eye it was evident that a rain squall was about to hit (large dark clouds are a dead giveaway), so I pulled my kayak onto the beach and ducked into a gap in the trees and then there it was. Construction on Nan Madol started somewhere around 700 years ago. The rocks that make up the architecture of Nan Madol are basalt, and since these rocks don’t appear on Temwen, that means the rocks were quarried somewhere else on the island and transported. So that means every time you look at a stone at Nan Madol, someone put that there. The legends say it was constructed by two magicians using dragons. Having been there, facing that seawall, I see how that theory seems the most reasonable.

The seawall I came across is still impressive. Nan Madol has been abandoned for about 400 years, and this seawall has suffered from four centuries of tropical cyclones and no maintenance. Still, massive boulders stacked 20′ high is a daunting sight now and must have been mind-blowing in its prime. Not knowing the extent of Nan Madol at this point or how much of it I was going to be able to see, I took my time in this nook. It was raining anyways so staying in the jungle was a pretty alright option. I clambered over the wall in my flip-flops and got my first look at the classic Nan Madol log-cabin-but-with-basalt architecture. I took an embarrassing number of selfies with various bits of rock and eventually noticed it had stopped raining, so I decided to continue on my kayak.

The next major feature I came across as a I paddled northeast along the seawall was a coral lagoon (later identified as Namwenkau). The reef line is fairly far out, and since the tide was out I spent a lot of time dragging my kayak behind me as I walked through ankle-deep water. In this section the seawall formed a horseshoe and the shallow reef gave way to a deep pool surrounded by coral and mangrove. Eels were sacred to the people of Nan Madol and I spotted more than a few on the reef and in this pool. As I saw each one I made sure to say a little thank-you mentally for letting me hang out on their turf. It’s always a good idea to curry favor with the local animal deity when paddling through ancient cities. 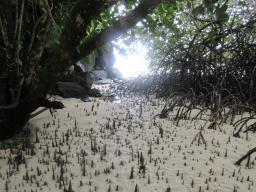 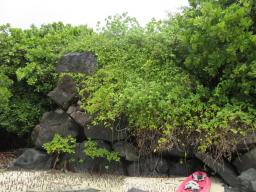