“Nan Madol” translates into “the spaces between,” which besides being one of the first facts you discover in a quick internet search refers to the channels between the islets of Nan Madol. The city was built on a reef and is made up of man-made islets that are surrounded by a constant comparison to Venice. The seawall I keep referring to is the outer wall of a series of large islets that compose the outermost ring on Nan Madol. Further up the seawall I eventually came across a channel that gave way to the city proper. This gap in the seawall was spanned by two lines of rocks that extended from the wall and into the channel. I think these were wave-breaks to reduce the effect of the ocean on the thoroughfares of Nan Madol. I spotted these first and as I turned the corner I spotted my first distinct islet. I was ridiculously excited about this little thing. My first glimpse of the seawall when I turned the corner in the kayak had my heart racing, but that corner didn’t have the log-cabin style architecture (it was boulder stacked very neatly on other boulders). Further along the seawall it transitioned to well-stacked basalt columns, but turning the corner to see the islet was my first real “wow, this is Nan Madol” moment, and that feeling just kept getting topped as I continued in this city.

The islet that I spotted and had been swooning over was Peinering. It rises out of the surrounding channels and is completely log-cabin style. From ankle-deep mud, you look up at walls ten feet high. The main entrance is on the side opposite the sea, and the wall has crumbled in one corner. The islands are not entirely basalt; they are constructed with basalt walls but the in-fill is coral. This coral is extremely sharp. This proved very difficult to navigate in flip-flops, and I recommend that anyone visiting Nan Madol wear close-toed shoes. The next day I wandered around the city in tennis shoes that drained easily and those worked well, but those tennis shoes wound up in the trash once I got home. I think a solid pair of reef shoes would be ideal.

I asked my guide the next day what he thought the floors originally were, since no one credits the ancient Ponapeans with the invention of the tennis shoe. His theory is that on top of the coral in-fill there would probably be a layer of smaller gravel and then a final layer of dirt or sand. The topmost layer would serve as the walkable surface. In the intervening centuries the normal course of erosion has washed it away.

Continuing a theme, I took an embarrassing number of photos and selfies on Peinering, not knowing if I would manage to see a finer example of Nan Madol architecture. The islet features at least two smaller structures made of basalt and rising to about waist height. My initial thought on seeing these was “brick pizza oven,” harking back to the Italian connection. I might not have been too far off; Peinering was used for the production and storage of ceremonial coconut oil, so these structures had something to do with that.

Standing in one corner of Peinering and looking out over the channel and into the mangroves, I spent some time really trying to imagine what the city must have been like in its heydey. Coming in from the sea you would have seen a towering seawall hundreds of yards long and dozens of feet high. Paddling in on your canoe you would have entered a city of nearly a hundred islets, criss-crossed by channels. Nan Madol was the center of the culture and home to a God-king, and it was a city of priests and ceremony. The average Ponapean in modern times lives in a house, but you’ll still see (as you traverse steep slopes in your Yaris) examples of the traditional thatched architecture put to various uses around the island. A newcomer would have transitioned from his village of thatched huts to a city of stone temples and palaces. If you gained a vantage point, you would look out over more than a hundred acres of city, the smells and sound of the sea mixing with those of coconut oil and ceremonial chants and all the normal chatter, highlighted in the bright tropical sun. It would have been beautiful. 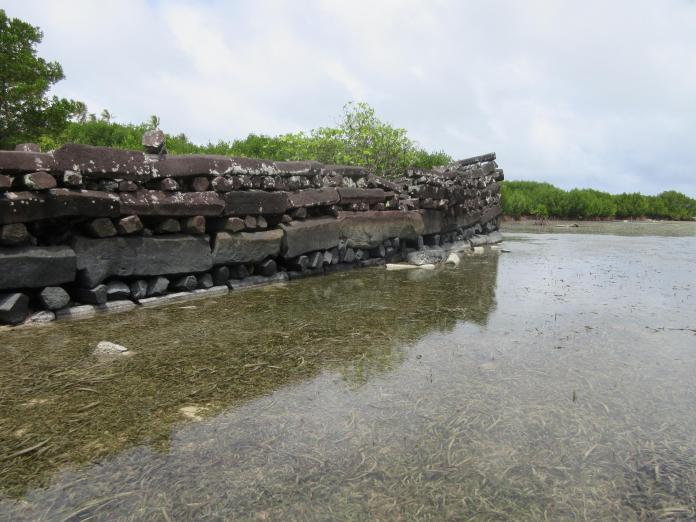