This past week it was back to farm country. We were officially on summer break, so we decided to head back north for some idyllic pastoral scenes, such as the above one with fluffy sheep. But! These fluffy sheep were not to last, because the World Famous Fred DePaul was coming down to shear some sheep and I got to help out!

Shearing sheep was the big event for the weekend. It only happens once a year, after all. Or anyway it’s supposed to happen once a year. The big drama this particular weekend is that the local newspaper had a front-page photo of Sheep Shearin’ Fred shearing a sheep that hadn’t been sheared in two years. This was dramatic because any responsible sheep farmer knows to shear their sheep every year, because it’s neither good for the sheep nor good for the wool to let the sheep go two years. Fred didn’t own the sheep, but everyone involved was worried that their good reputation would be harmed by the journalistic indiscretion. What has the world come to anyway?

Sheep shearing was scheduled to start at about 10 in the morning with the arrival of Fred. Farmer Billy, as my girlfriend’s dad is known to his legion of online fans, had prepared by rounding up the sheep. Besides being sheared, they were getting their hooves trimmed and getting deworming shots. All the lambs were getting banded and docked just so they wouldn’t feel left out.

It is a joke that I managed to make several times that day, but with the whole world protesting so they can be allowed to get a haircut the sheep were notably unethusiastic about their all-inclusive spa day. I mean between a haircut and a mani-pedi what more could you want? But they were unenthusiastic (I know I can’t blame ’em). To shear the sheep, you flip ’em on their back or on their butt, at which point they largely go limp. Most of the time I thought they resembled toddlers who didn’t want to do something, having to either be dragged along or hiding behind their parents. But Fred and Farmer Billy are very experienced and caused them no harm. I feel like after they’ve been sheared they must have quite the spring in their step, having lost all that fuzz. At the very least they must be cooler, with summer temperatures finally starting to make a debut.

One of the sheep reluctantly waiting her turn.

My role in the whole operation was largely moral support. I opened several gates and reluctantly bagged several bags of wool. One time I also measured out some medicine, but that was only because no one else was available. I did get kudos for grabbing the lamb of one particularly protective sheep. “Wow, you dove right in there!,” I was lauded, after heroically picking up a cute lil lamb, which we then used to lure its mom towards her inevitable haircut. Later my girlfriend took over lamb-holding duties, and she had to pose for both me and her mom as we obsessively took the cutest pictures ever. Those pictures are not included because she is the only person that reads this blog and I think she would be upset if I posted them. 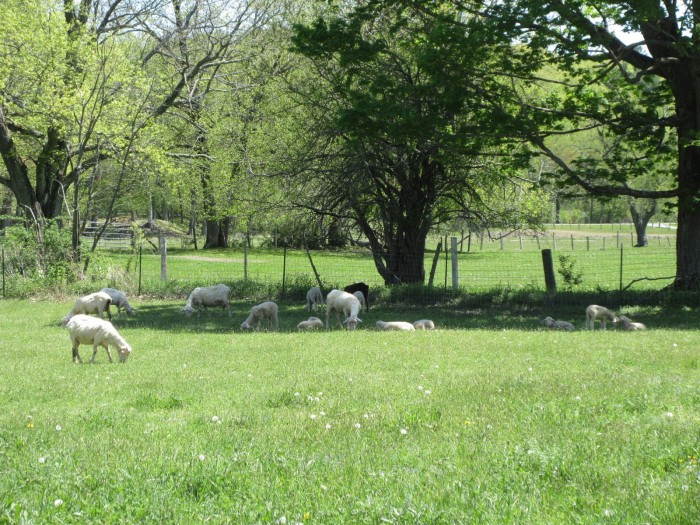 After several hours the sheep were all finished getting sheared, and were released back into the field, where they were quickly distracted from their woes by grass. If I learned anything that day it is that, as my girlfriend pointed out, sheep are very easily distracted by grass. All the little lambs had very tight rubber bands around their tails at this point and couldn’t care less when presented with some grass.

Of all the sheep, the most dramatic makeover was Emmett, the friendly ram. He was tricky because his horns had to be maneuvered around, and I had failed to realize he had ears, but here he is, in all his shorn glory:

Overall quite the exciting day, and afterwards I lay down on the couch for quite some time out of laziness. I hope my lamb-wrangling skills managed to impress Farmer Billy.