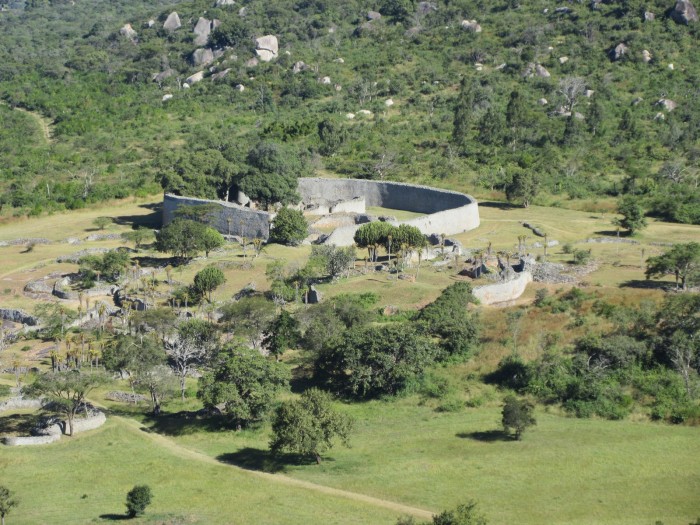 Great Enclosure from the Hilltop Complex

Having arrived at the Great Zimbabwe Hotel, and having learned my lesson from the previous day, I started of by getting a very delicious hamburger at the hotel. It was only about 1300 at this point so I then decided to walk to the ruins. I took the long way ’round accidentally, but made it. I was a little bummed about paying the $15 entry fee two days in a row, but eh, worth it. I also bought a rather battered guide book to Masvingo and the ruins (last copy! they said) and it was been pretty helpful. After the entry fee I went to the museum on site which is pretty awesome and well done, and features the famous soapstone birds of Zimbabwe. They have all seven there. For about a century they had been in rather far-flung museums, because back when colonialists first showed up they ganked the birds right off the ruins and sent them off to their friends. Zimbabwe, however, has managed to recover them and has them on display.

Some of the soapstone birds.

After the museum I went up to the hill site. First off, Great Zimbabwe is way more complex than I thought. I was familiar with the Great Enclosure, which is that thing you see when you Google “Great Zimbabwe,” but it is a much more extensive site. This first day I only managed to poke around the hilltop complex. Building the hilltop complex must have been crazy. It’s perched right on top of a tall, steep hill, and hauling all those quarried rocks to the top would have been a massive labor. All those walls perched on top of the cliff face. The complexity! The views! And between the guidebook and the museum I thought I had a pretty good grasp on the site and was excited to spend the whole next day at the site. According to the guidebook, the hilltop complex was not a fort, but it is an easy misinterpretation to think that because of the narrow passageways leading to the top (easily defensible) and the commanding views of the surrounding areas. You could not sneak up on Great Zimbabwe, that is for sure. In the distance is a pretty dramatic looking valley and you have a pretty awesome view of Lake Mutirikwe. The whole place is stunning and amazing and stuff and like wow. After the hilltop complex I decided to call it a day and took the short way back to the lodge.

Me and the wall of the Great Enclosure. 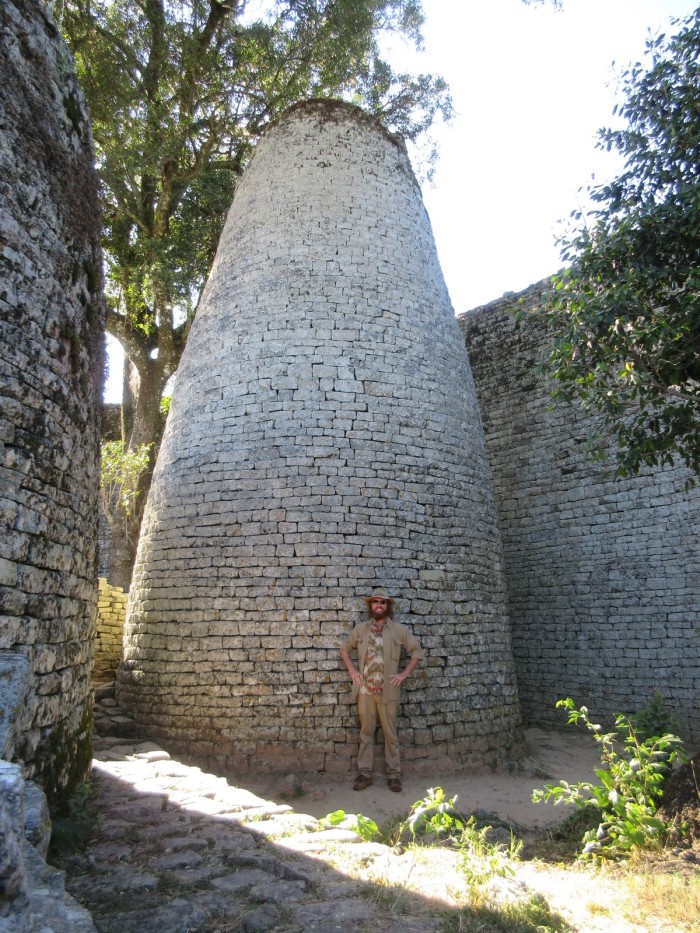 This structure is thought to represent a grain silo and has been restored after years of treasure-hunters tried to find a non-existent hollow void in the middle.

The next day at Great Zimbabwe was fantastic. I managed to spend most of the day at Great Zimbabwe, justifying staying there for two whole nights instead of just one. I woke up kinda early and had a delicious breakfast at the hotel and got ready to head down to Great Zimbabwe. Luckily the guys at the gate remembered me and let me into the monument without paying again which was really nice of them. The first thing I went to go check out was the Great Enclosure. That thing is pretty huge. I barely know what to say about it. It is really hard to capture the size of the thing in pictures but I tried. It is a lot more massive than it even seemed from afar yesterday. I used the timer on my camera a lot today to put myself in pictures and to try to capture the scale of the place but lemme tell ya it is big. After the Great Enclosure I wandered over to the Eastern Ruins and checked out the Shona village briefly. You can stay the night there for the authentic African experience. Gee I wonder what it is like to sleep in a mud hut?

My next stop was back to the Hilltop Complex. I wanted to take another look at it since the previous evening I actually had a chance to read the guide book and had a better sense of what things were. The unfortunate part of the hilltop complex today is that I was there at the same time as a big tour group of what sounded like Australians, so I was dodging those people. Though that got me thinking. It was nice to have the whole monument to myself, or to feel like I had it to myself, but then on the other hand it is hard to get the sense of what the place would be like as a city. I mean somewhere between 2500 and 10,000 people lived there (depending on what sign you read) and that is hard to grasp with just a few stone walls. The whole place would have been littered with mud huts. I have some sense of what it would be like because I have been in densely populated mud hut towns but still to see it in situ would really be something else. I was thinking what would it take to get like, 10,000 people on the site all at the same time just to calibrate the right sense of scale. That would be amazing.

The “stage” in the hilltop enclosure. The kinda bird-looking rock in the upper left of the picture is thought to have maybe inspired the soapstone birds, which kinda don’t actually look like birds but do look like that rock.

My other thought about the Hilltop Complex is that the Eastern Enclosure would be a sweet place to put on a play. It’s already got seating and this several tiered stage (they conjecture it was used for religious ceremonies), and also importantly it has this “backstage” area; the point was apparently that you could pop out on stage from these secluded rock areas. I bet if you wrote a grant for the project and had local thespians put on a play about traditional Shona something something people would eat that up, yo. The other cool part though about looking back in the “backstage” area is that there is a path back there that leads to the “Summit” (there was a sign) that gives absolutely magnificent views of the whole Lake Mutirikwe valley area and like wow man. Like totally wow. These Great Zimbabweans really picked the spot to stay at. After looking at all this (and going down a side path to see the “Water Gate” to view the only example of herringbone wall decoration at Great Zimbabwe, which at this late date has been reduced to four rocks placed diagonally on each other) it was time for lunch. I was gonna eat lunch on-site, but the cafe is lacking, so I went to the hotel for lunch and then ventured back down to the monument. I took another look at the Great Enclosure and the Valley Enclosures, and then a little past 1400 called it a day. The rest of the day was spent in the lodge room relaxing which has been very relaxing, as you would expect relaxing to be. 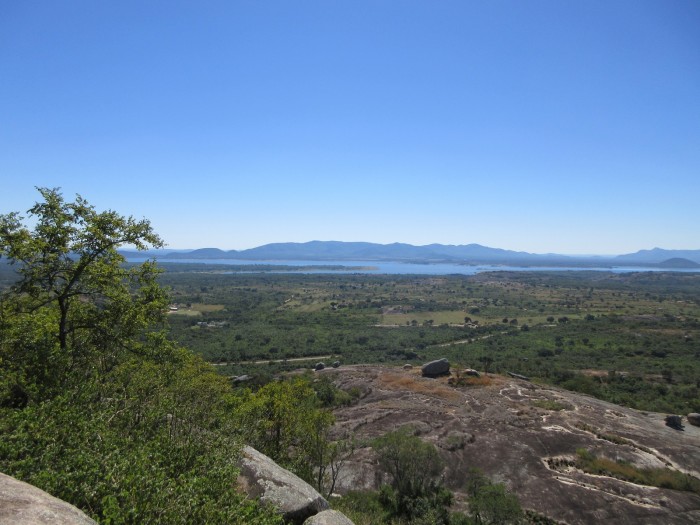 View of Lake Mutirikwe from the summit.

In summary for Great Zimbabwe, the site is stunning and should get more tourist attention. I was only really aware of the Great Enclosure before I actually visited the site, and while that is impressive (largest native stone structure in Africa south of the Sahara) I wasn’t aware of the whole city and civilization surrounding the site. The place would have been absolutely magnificent to see at its peak and I only wish there was a way I could really get a glimpse of that.