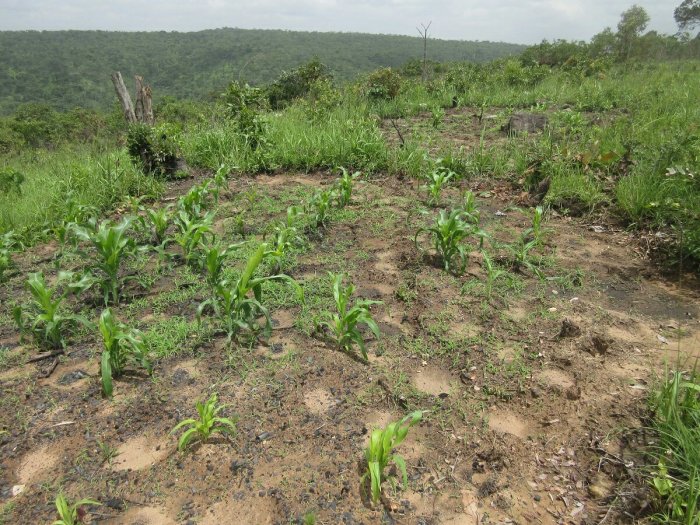 So I spent some time trying to make charcoal. Specifically, I was trying to make bio-char, which is a fancy name for tiny pieces of charcoal. Adding bio-char to the soil can be really beneficial; it helps the soil retain water and can provide some nutrients. The proof of this is in the above picture, which shows maize a farmer is growing in a spot where he had previously made charcoal and where there are currently little charcoal bits in the soil. The farmers know that these locations are very fertile. 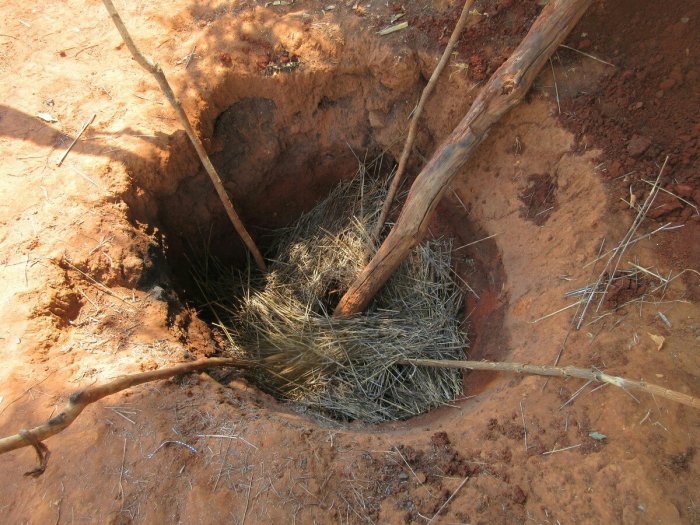 My first attempt was to try to make bio-char in a hole. Step one of this was to get a whole bunch of maize-cobs to make the charcoal with. To accomplish this I employed children. This was a disaster. There are maize cobs scattered all over the village, but I didn’t feel like gathering them myself. So I offered to pay kids one kwatcha for a bucket of maize cobs. Soon I had a deluge of maize cobs. But then kids started trying to cheat me, bringing me buckets of mostly trash with a few maize cobs on top, or one kid brazenly tried to mime that he was emptying an empty bucket of maize cobs into the hole and then asked me for the kwatcha. Kids started getting upset because very little kids would bring me a small bowl of maize cobs and then I felt obligated to pay them too, which the kids bringing me a whole bucket felt was unfair. Then I had parents angry at me that I was paying the kids in money instead of candy and the whole thing was terrible. Lesson learned: children are small and devious and are not to be trusted.

With the hole full of maize cobs, the next step was to cover it in dirt and light it on fire. The trick to making charcoal is to pretty much burn wood (or maize cobs) in the presence of no/little oxygen so it carbonizes instead of burning completely. When I first lit the hole on fire everything seemed to be going well. After I while I sealed it up and waited until the next day. I was disappointed. The hole was never really effectively on fire and I spent a lot of effort just digging up maize cobs.

The next effort was to make a pile above ground and then cover it with dirt. This is how people make charcoal for cooking and the like anyways. I got a little fancy, digging a depression in the soil and putting the straw down as a “wick” so I could light the bottom of the pile on fire effectively.

I made as big a pile of maize cobs as I could. I was pretty limited by the angle of repose, but it was a pretty alright little pile. Then I covered it in dirt (usually mud is better, because it clumps better, but the water was far away and I was lazy) and lit the sucker on fire.

I initially left a hole at the top to let it start to get really on fire. It made a whole lot of smoke, which is a good sign as far as charcoal-making goes. After I felt like it was good and on-fire, I piled more dirt until the smoke stopped escaping, and then left it to burn for the night, checking every once in a while to fill in holes. I actually wound up waiting I think three days, because it was still on fire.

The charcoal comes own as pretty easily recognized maize cobs, just now they’re black. Maize cobs aren’t too dense, so they’re pretty easily smashed up into tiny little bits of charcoal, which I am excited to add to my soil so hopefully I can really grow some great stuff this year. I have been looking forward to this planting season for months now and I am excited for the rains. After getting the technique down, I made a few more piles of bio-char, especially using all the dried-up weeds and grass I cleared from my yard in preparation for planting. It’s gonna be awesome!