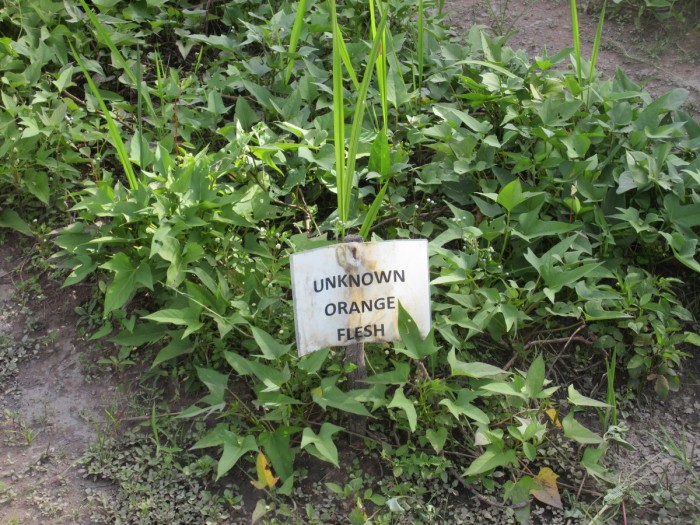 This past week (feel like I gotta get a new start for these articles) I went to an Orange Fleshed Sweet Potato (OFSP) Workshop! Loyal readers (there are none) will note I have already been to a workshop on OFSP, but this one was bigger, better, and longer. OFSP Reloaded. Where the previous workshop was meant to be an introduction to both OFSP and orange maize, this workshop was focused on producing orange fleshed sweet potato with a particular bent towards seed production.

Overall the workshop went pretty well. The first day was all classroom stuff and focused heavily on nutrition. OFSP are, of course, high in Vitamin A. Vitamin A is one of four major nutritional deficiencies in Zambia, along with protein, iodine, and iron. Since people already grow and enjoy the white-fleshed varieties of sweet potatoes, it is a relatively easy “upgrade” to the orange kind. During the workshop we focused on overall nutrition, why it is necessary to eat a balanced meal, and, most importantly, techniques we can use to teach these concepts back in our villages. One of the best ways to do this is using the “Go, Grow, Glow” model. In this model, carbohydrate foods are “Go,” giving you energy. Protein foods are “Grow,” helping to build the body. Finally, “Glow” are foods with minerals and vitamins that help maintain overall health. By assigning foods to these categories and encouraging people to eat all three with every meal we help teach about a balanced diet.

Over and above the previous workshop we did more hands-on activities. We went through the entire process of planting vines for rapid vine multiplication and for root production. We also did some rudimentary soil testing that people could do on their own land for little money. First, by feeling the consistency of the soil the farmers can determine if it is sandy, clay, or loam soil (or a combination). Then, by adding either vinegar or bicarbonate (baking) soda to some soil and seeing if it fizzes, farmers can determine if the soil is basic or acidic and act accordingly.

We also spent a whole day cooking meals with orange fleshed sweet potatoes. Traditionally, sweet potatoes are mostly consumed for breakfast and are only boiled. That might be unpalatable for some people, and since it is a “breakfast food” people might not eat the potatoes for lunch or dinner. So we used OFSP to make meals like curry or stew. We were also focusing on processing sweet potatoes, so we made OFSP flour. This flour is easy to make (just dry the potatoes and then pound them) and can be mixed 50/50 with wheat flour. The mixed flour can then be used like 100% wheat flour in recipes for bread, fritters, or other baked goods. This allows people to get Vitamin A in more of their foods and is a cheaper alternative to pure wheat flour. We even made OFSP pancakes on the cooking day and they were pretty awesome.

Finally, and exciting for me, my host dad and I got to see a cassava processing center. This workshop took place in Mansa in Luapula Province, the location of the nation’s root and tuber research center. Besides the sweet potatoes, they also have improved cassava varieties. I was interested in bringing back some improved cassava to the village, and my host dad was interested in seeing the processing facility. They have a very nice facility there where they have machines to grate, press, fry, and mill the cassava in bulk. Cassava is a very popular food security crop here, but with some mechanization can be a very profitable crop as cassava flour gets a much higher price than maize flour. And it takes less resources than maize! The research center here has planting and harvesting machines that they will bring to your fields for only ~$260/Ha. I am told this is cheap, especially as it includes fertilizer and herbicide, though farmers have to provide their own planting material.

On top of all THAT, they also grow a lot of cocoyam (taro) here in Luapula province, and I was able to secure some seed for that as well. So now my host dad and I will be bringing back three different root crops to our village and I am pretty excited. Diversifying crops leads to better food security, as well as potentially introducing new markets that farmers could use to make more money. Root crops are usually relatively easy to grow, drought resistant, and very hardy, and make ideal crops for food security. Two years ago I never would have thought I would be this excited for roots man.