The valley where a lot of the village farms.

First off, “Biking the Mwambezi” is pretty much entirely a lie. That was my intention, and in almost no way did it pan out. My village is near the Mwambezi River. I was hoping to follow the Mwambezi River to where it emptied into the Lunzua River, which culminates in the Lunzua Falls where the river flows into Lake Tanganyika at Kituta Bay (since the lake sometimes empties into the Congo River, that means I live in the Congo River Basin, which I think is kinda neat). I hadn’t gone that way before, but from the satellite photos on Google Maps, it all looked pretty bikeable.

I left the house at 0630 when it was still early but there was enough light. I started off on my bike. My village actually does a lot of its farming not in the valley the village is in, but in another valley tucked away around a ridge. This path is well traveled and therefore bikeable. Past the fields, however, it pretty quickly deteriorates and I was pushing my bike over a thin path through tall grass. I got soaked in this process, brushing past the dew-wet grass. 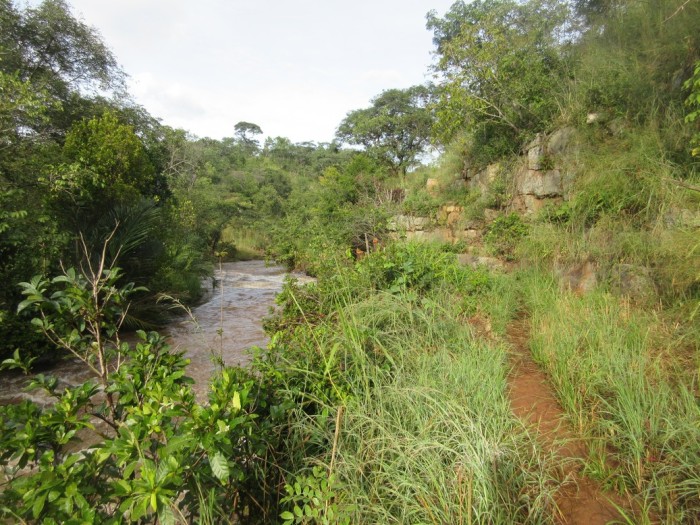 The major redeeming feature of this part of the adventure was being near the Mwambezi River. Lake Tang (the Mambwe word for the lake is actually “Liemba;” “Tanganyika” is a Swahili word), as I think I have discussed before, is actually a Great Rift Valley, er, valley that is filled with water. The area surrounding it, including where I lived, is therefore comprised mostly of stunningly beautiful river valleys and gorges and escarpments that surround and empty into the lake. So that means I was traveling through one of said gorgeous river valleys.

After about two hours of bushwhacking, I finally found a stretch of good path that was bikeable. So I hopped on my bike, biked about 25 yards, heard a rubbing sound, looked back, and watched my tube blow out because my tire had a hole in it. This, obviously, put a pretty major damper on my “biking the Mwambezi” plans. Since I was two hours into the bush, I figured the best course of action was to leave my bike with someone, with the plan of returning later, probably the next day. You see, I was expecting to be at the falls by noon and back home that same evening, and I figured there would be replacement tires I could buy in Mpulungu. Every one of these assumptions was wrong.

I walked my bike a little until I came across a house with someone home. It took some explaining, but I conveyed that I wanted to leave my bike at their house and come back with parts to fix it. People are friendly so they were more than willing to let me leave my bike against their house. The most amazing part of this for me was that, two hours into the bush, in a village that I had never been to before, people knew who I was. As I was trying to convey that I wanted to leave my bike there, I heard one guy explaining to another where I lived and who I lived with. I guess word of the white guy gets around.

Having found a place to stash my bike, I figured it would be best to just continue on my trip, just sans bike. When I originally conceived this plan, it was to be a hike anyways, with the bike a later update. Plus I really just wanted to go see the falls. So I made some mental excuses and continued on, getting to Isoko a short while after.

Isoko, with sugarcane underneath the palms (closer to the river).

Isoko is a really nice village. I have recently learned that a Chief lives there, though when I looked around (briefly) I didn’t find his palace. But it is relatively close to Mpulungu, and has relatively good roads, and so is therefore relatively developed. One of the advantages of walking over biking is that you notice a lot more things, and it is a lot easier to take detours down small paths to learn what people are growing. Since integration is such a big part of fish farming, I’m really interested in what people are growing, especially crops they don’t grow in my village. Taking one of these detours I found out that they grow mostly sugarcane in Isoko. I also admired one person’s guava orchards and the living fences most people had set up. It is a really nice village!

One of the major disadvantages of walking, however, is that it is harder to get away from the small children that tend to gawk and then follow me as I wander around the backcountry. A group of these kids started following me and wouldn’t leave me, despite my detours. They convinced themselves I was going to Mpulungu (which was true, but not via the shortest route) and that they could lead me there in exchange for money. As we walked along, we crossed the Mwambezi, which I didn’t really want to do (my planned route didn’t involve any river crossings, except at the end), and meant I was a bit lost. That, combined with my strong desire to get away from these kids, convinced me it was a good idea to scale a rather large hill to get my bearings. The other disadvantage of walking is that on a bike, you tend to stick to actual paths instead of barreling off into the woods.

One of the many things that amazes me about what people do around here is that on top of almost any hill you’ll find a cassava or maize field. Like, scale a huge hill way away from anything and I swear you’ll find maize. I asked about this and my host uncle says the reason is that the soil is better up there, and in the valleys it tends to be swampy. Fair enough, but jeez that is a lot of walking. So I scaled this hill and found a maize field. I also discovered that right next to this hill was an even bigger hill, where I figured I could get an even better view. So off I went.

Scaling the hill was probably a bad idea. First off, there was no path, so I was really bushwhacking. It was scrub forest, so it was pretty easy going. Second though, about halfway up the hill I discovered the hill was a lot taller than I thought. And looking back I could watch the rain slowly coming across the valley. But I still had water and I thought I was making good time and my knee wasn’t hurting so up I went to the top of the hill.

Looking back across the valley over Isoko.

This is where I end this blog post and tell you to read part two because if I was gonna hike for 12 hours I’m gonna get two blog posts out of it, that’s for sure.