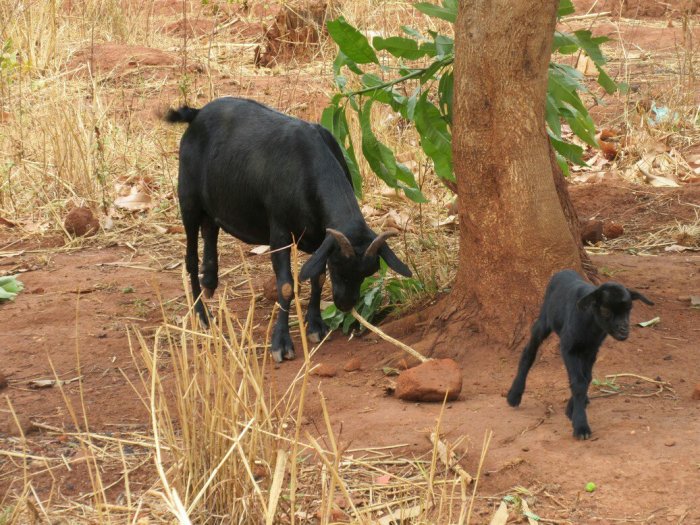 I have a love-hate relationship with goats. There are a ton of goats in my village. They’re a pretty popular animal in Zambia. They’re easier to manage and easier to feed than cows, and they require less land. They’re smaller than cows, which is an advantage when you slaughter them. There’s no refrigeration in the village, so if you’re gonna slaughter an animal you have to eat it or sell it all in one go. It’s usually on menus in the fancier places as “Imbushi,” which is the Bemba word for goat. 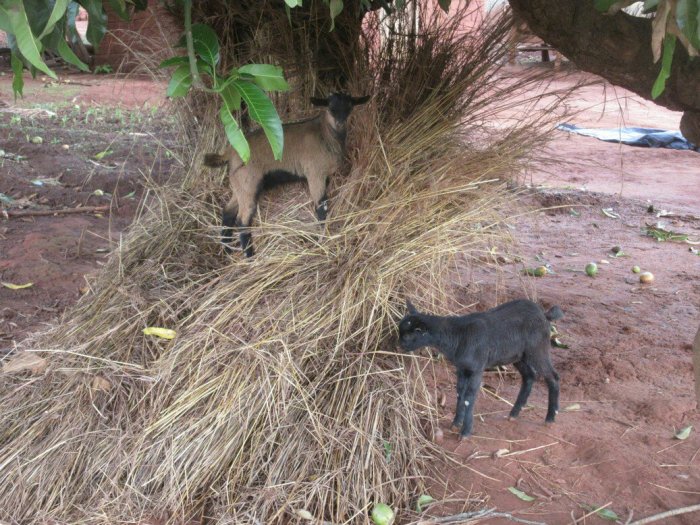 The “love” part of this relationship is because those buggers are so darn cute when they’re babies. They’re small! They got little knobby knees and high-pitched voices! They run around but stick close to their moms! 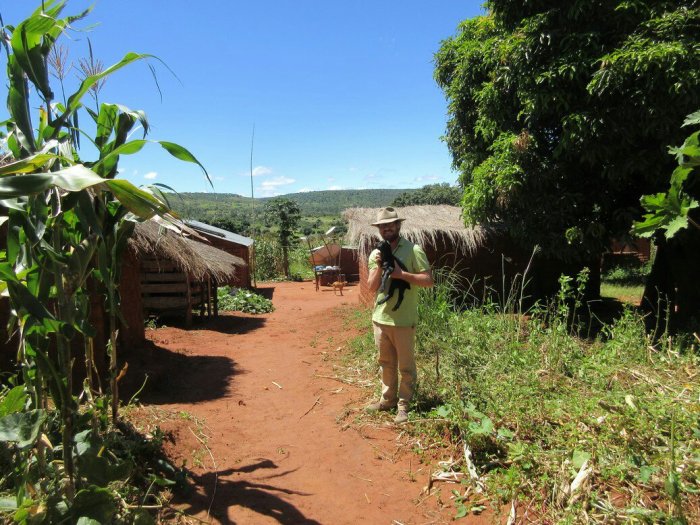 Look at this picture of me hugging a little baby goat! It’s the greatest! The “hate” part though? They can be such little shits. 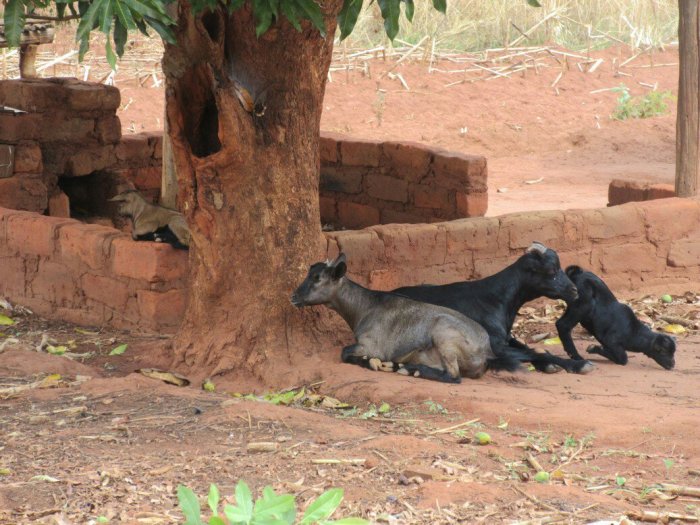 Here’s some goats hanging out near my insaka. Cute right? Look at those little guys, perched on the wall! And then they get up and kick over the bricks and cause all sorts of damage and then poop right in the middle. Stupid goats. The soundscape of the village is dominated by goats. I wake up most morning to the sounds of goats bleating. There was one goat for a while that would frequent my yard, sneezing heavily while also trying to call some willing female to mate with. I think Barry White would have worked better. When you first start living around goats, it is hard to distinguish the sound of children screaming and goats screaming. They’re very similar, though with experience you can tell them apart. It is handy to forget that, however, when the neighbor kids are crying and you can pretend it is just goats. In the dry season, the goats just wander around freely. They eat whatever they can find, which is fine. In the rainy season though, people start growing maize and the goats get tied up. The baby goats, however, get to wander around. Usually they stay with their parents. Sometimes, those little assholes break my fence and eat my velvet bean: 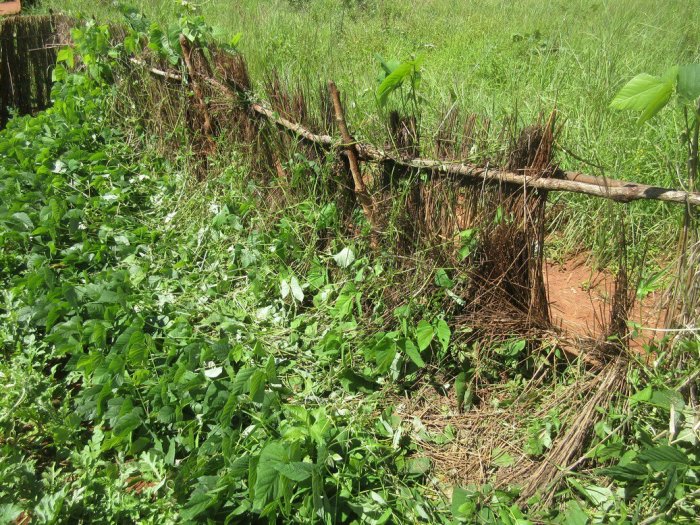 The worst part? There is no gate on that fence! They could have just walked around to the open door and eaten my velvet bean without knocking down my fence. But nope, little shits gotta create more work while destroying my velvet bean. I got friends who are good with goats. Someday I will learn their ways. I just want to be friends with the baby goats, but they’re all scared of me. Probably because I chase them from my garden and then up the hill to teach them a lesson, but still. It’s been on my to-do list to get some goats and milk them and make goat cheese both because I love goat cheese, and also because I want people to get more protein in their diet so they aren’t all so short so they build houses to such a height where I don’t hit my head on my doorframe every other day walking out of my house. It’s the little things that keep you going.

As a slight update from when I originally wrote this post, I seem to have gained the advantage in the war with the goats. Since the goats had it out for my velvet bean I had to take a more active role in preventing them. The solution was to chase these suckers down. Turns out it is hard to chase goats down because they are more maneuverable through low dense brush than I am, but the trick is to enlist some children. As I was chasing a goat around the village, the kids would get in on the action and help me chase it down. The children are shorter than I am, and are therefore more maneuverable in the low brush, but also strength in numbers lets us corner the goat into an ambush. After we corner it we tie it up and admonish whoever owns it to keep it tied up from now on. The goats hate being tied up. When they are first tied up they yell and try to get out. Then they get distracted by some grass and start eating. They’re terrified of me now though for chasing them down. The only bad part about this whole experience is the first time I chased down a goat with the kids, the kids asked for money. I threw some kwatcha their way in appreciation, but this created a bit of a monster; the kids would ask for kwatcha anytime they chased down a goat. This built a lot of enthusiasm for keeping goats away from my garden, but I was worried the kids were letting the goats go or something. At any rates the goats seem to be tied up more consistently these days and hopefully my velvet bean makes it all the way to harvest. At least I know the stuff makes good goat fodder.