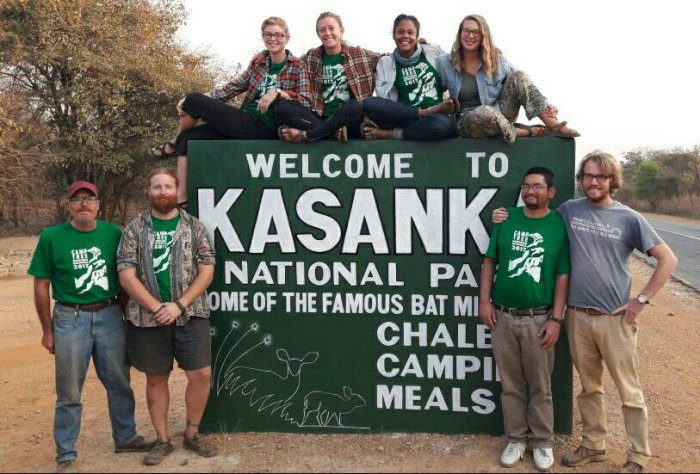 This past week I helped teach at Camp TREE. TREE stands for “Teaching Respect for Everyone’s Environment” and it is a week long camp about the environment and related topics.

The Peace Corps camps that we take these kids too are a pretty cool opportunity for the kids. I say “kids” but these are really teenagers. In our case we took them down to Kasanka National Park in Central District. A lot of times these camps are the kid’s only opportunity to go to a place like a national park and see things like animals or an unspoiled environment they probably otherwise wouldn’t get to. It is also a rare opportunity for the kids to interact with other Zambian youths that aren’t in their community, away from the pressures of home and parents and the like.

This week there were the two PCVs running the event, Jenna and Bryan, along with six PCVs (myself included) helping out. We all brought three pupils from our village so we had a nice little gaggle of kids. There were various sessions planned, and we all helped teach various sessions. We held the sessions in both English and Bemba to make sure all the kids could understand.

The sessions were a mix of classroom type stuff, games that may or may not have anything to do with the thing we were teaching about, and some team-building exercises. One of my favorite sessions was talking about the food web and food chains. After going over some classroom stuff we went outside and made a food web as the kids all named different animals that eat each other. Then we demonstrated the importance of the food chain by having them do a “group sit” where everyone is in a circle and sit in each other’s laps. Then I removed one animal from the food chain and they all fell down. Exercises like that let the kids relate the things they were learning to things they have already seen around their village, and help to drive in the message while they still have fun.

We also learned some practical things, like how to make compost. Compost is popular in Zambia because fertilizer is so necessary for growing crops, and is a major expense for most farmers. Anything they can do to make fertilizer or compost more accessible is very popular.

Team building exercises helped the kids learn some stuff about empowerment so hopefully they can come back to the vil and help teach other people and kids about what they learned. In one exercise that was pretty enjoyable to watch, we blindfolded the kids and told them we were taking them to a maze. They had to keep their hand on a log and follow it while blindfolded to get out of the maze. Secretely, it was just a circle. To get out of the maze, you had to raise your hand and ask for help. The lesson here is sometimes you have to ask for help. I was pretty proud that the last two kids were two I brought. Never give up, never surrender!

One of the final things we did was go on a game drive. A lot of times these kids never really get to see the diverse fauna of Zambia because around their villages the animals have all been hunted. Going on a game drive is the only way they are really able to see things like pukus or warthogs. On our game drive we were hoping to see elephants but didn’t find any. Despite that, the kids had a great time riding in the back of a safari truck and seeing all sorts of antelope and birds and just the wilderness of Zambia.

I was worried about Camp TREE but going to it was such a great experience for the kids and they really got so much out of it. It was great watching their moments of discovery and seeing them get excited about looking at things through microscopes and picking up animals bones. They were so happy to be hanging out with peers and hosting impromptu dance parties every night. As I write this after we’ve gotten back the kids I brought are still wearing their Camp TREE shirts. A great success all around.