Don’t worry, fine readers, the adventures of Pat and Ian Go To Various Maryland Historic Sites continues. Today we went to Fort Washington. Fort Washington is located on the Potomac River a little south of DC. It was built in 1809 and designed to protect DC from anybody who might want to invade, or whatever. Like that would ever happen. I had never heard of the place until I was looking for National Parks to go visit with all of my unemployment time.

Ian and I set off on a bright Wednesday morning and arrived a little before lunchtime. We very nearly had the place to ourselves; I only spotted one couple walking around and a dude playing some one-on-zero basketball the whole time we were there. Our first stop was the visitor’s center, where the Park Ranger just seemed excited to have someone to talk to. When I first looked up this park, I was expecting something very similar to Fort McHenry. Both of the forts were built at about the same time and have similar(ish) histories. The big difference, though, is that people care about Fort McHenry due to that whole star-spangled banner thing, and I had never heard of Fort Washington before. Consequently, Fort Washington does not seem as well funded.

The visitor’s center has a small but well-done display of the fort’s history and some artifacts from the site. Like I said, the fort was built in 1809 but in a harbinger of things to come was under-funded, under-gunned, and under-manned. When, in the War of 1812, the British did sail up the Potomac, the commander decided his best course of action was to blow up the fort and skedaddle. After the war, the place was rebuilt, and, not wanting to be embarrassed again, the Army built it way better. As our very knowledgeable Park Ranger explained to us, the Confederates were very familiar with the fort’s capabilities and never made an attack, saving Washington but relegating the fort to a somewhat forgotten history.

First off though, the whole place is pretty nice for what they’ve got. The fort itself is a small part of a very large park complex. We drove through most of it and it looks like an excellent place for picnics and the like. From the visitor’s center, the fort is accessed via a short path down a hill and across a wooden bridge. The bridge is a replacement for a drawbridge that used to be there, which must have been awesome in 1840. Despite a lack of drawbridge, the fort itself is still very impressive. It is built on a bluff overlooking the Potomac with hugely large walls constructed of imposing masonry. Inside the walls, we had pretty much free reign of the place. The two barracks buildings inside the fort’s courtyard were locked but on days when they have more rangers around one of them contains a display.

We started out looking into every single one of the fort’s many storerooms. One of them contains some bunks, for some reason, but none of the rest of them that are accessible contain anything. We checked. Ian was excited that the ranger later confirmed that the decaying wooden doors on them are in fact 1840s-era, so that was cool I guess. Up on top of the walls, however, the views were much nicer. Almost all of the cannons from Fort Washington have been removed, I’m sure to serve as decorative fodder for other places, and so you have a clear path to traverse all the various ramparts. Ian has made it a habit now to walk as much rampart as possible whenever we’re at a fort, so we took in the stunning views from every angle possible. Fort Washington has gorgeous panoramas of the Potomac. Looking up-river, you can make out the Washington Monument (we sure really liked that guy). Looking any which-way, you can watch sailboats and river cruisers lazily go by.

Fort Washington these days is also a nature park, and after we were done with the fort we took a stroll down the creatively named River Trail. Signs warned us to report any suspicious animal activity, so I made sure to keep an eye out for any suicide bomber raccoons. I think the most significant nature we saw were some geese paddling around in the river, which I guess might be slightly suspicious. We hiked down the River Trail for a little while, admiring the trees and quiet, and then eventually turned around. Fort Washington was a very nice place to visit and we managed to cover most of the highlights in about two hours. I walked away from the place thinking it was pretty under-loved. Take a visit and learn some history and give the Park Rangers something to do. They seemed like they could use the company. 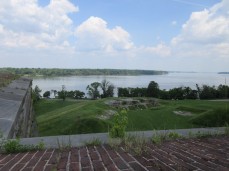 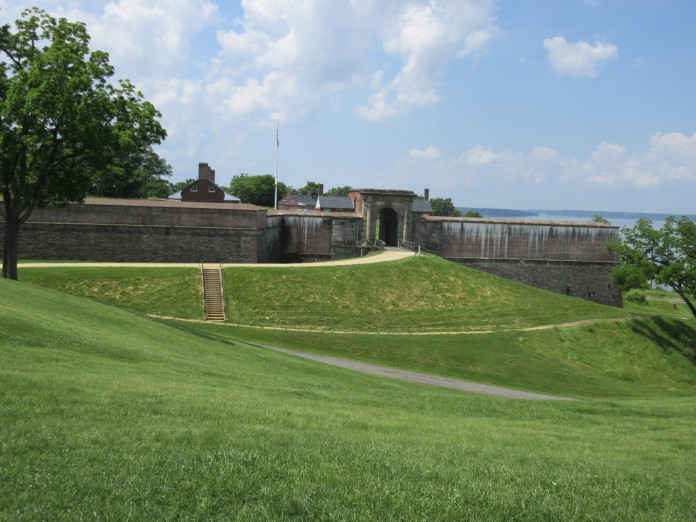