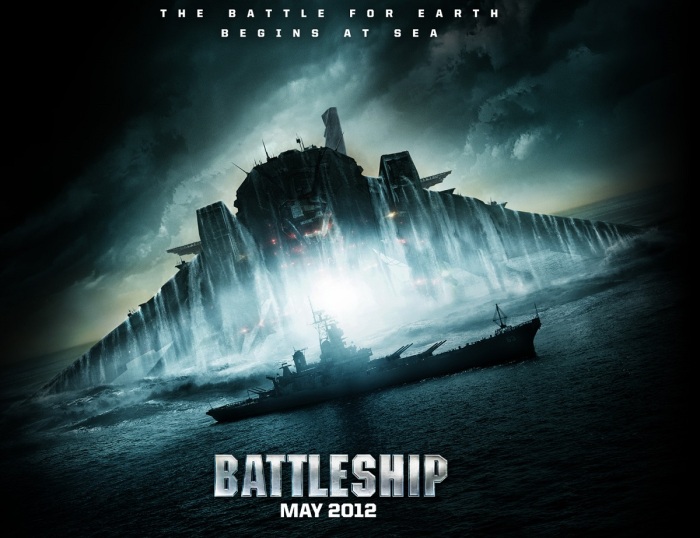 The greatest movie ever made was the 2012 blockbuster Battleship. I love this movie un-ironically. It is amazing. It is fantastic. It exceeds everything else that has ever hit the silver screen, and quite possibly any other form of art or self-expression that has been hoisted into the human consciousness. I will be having a totally normal day, and I am not joking here, but suddenly this absolute cinematic masterpiece will pop into my head and I can’t think of anything else. This happened today and I spent a few hours clipping out some of my favorite scenes and creating the gifset below with the hopes that magnificent triumph of storytelling will reach a greater appreciation throughout the world.

Let’s start with the basics of this movie. I am not so blinded with love that I don’t notice the movie’s flaws. The movie spends the first ten or fifteen minutes attempting, for some reason, to set up a love story or something. If I was director I would have skipped this and gone straight to fighting aliens. It features Taylor Kitsh as an undisciplined bad boy, forced into the Navy by his older brother (played by Alexander Skarsgård!) after he steals a burrito. The love interest is Brooklyn Decker, who’s admiral father is played by Liam Neeson! The cast this movie puts together! An absolute powerhouse collection of movie stars assembled so that the real stars of the movie, the ships, don’t too far outshine these bit characters. Other significant players include Tadanobu Asano as the captain of a Japanese destroyer inserted to play the straight man, and Gregory D. Gadson as an Army double amputee inserted to provide a message of overcoming setbacks, or something, and also beat the shit out of some aliens. And I haven’t even mentioned that this movie includes freakin’ Rihanna, who is an absolute badass in the role of Petty Officer Cora Raikes.

After the movie sets up this love story/bad boy plot, aliens land. Frankly the Navy handled the first encounter kinda poorly but who gives a shit because now we’ve set up the thrust of the movie: aliens have landed and it is them versus the finest goddamned Navy the world has ever seen. Due to that first encounter our bad boy Taylor Kitsh is in charge of the small fighting force left to actually fight the aliens, with a ragtag crew at his side. The rest of the movie is them kicking some serious alien ass.

So let’s discuss Battleship as it compares to some other examples of the Navy movie genre. The most famous Navy movie of all time is Top Gun. Top Gun is okay. Launching planes to “Danger Zone” is a great thing to do, but because of that scene the movie peaks right at the start and it’s all downhill from there. Then the rest of the movie you get like what? One and a half dogfights? Psh lame. Plus as a general rule aircraft carriers are pretty uncool; they have Starbucks onboard. Movies like the recent Hunter Killer have a special place in my heart for being submarine movies, but even that action-packed thriller suffers for featuring a Virginia-class; fast attacks are supposed to be nuclear-powered sports cars and any boat with bilge keels is more like a minivan. But what does the movie Battleship offer you?

Battleship offers you RIHANNA SHOOTING AN ALIEN IN THE FACE WITH A FIVE INCH CANNON. Citizen Kane parades itself around as the greatest movie ever made, but at no point in Citizen Kane does an absolute fantastic piece of naval hardware get used to obliterate an alien at point blank range by one of the most versatile women of the modern era.

The whole movie (except for the love story portions) is just badass nautical action after badass nautical action. It doesn’t hold back. In the above scene they think they’re down to a one-on-one battle, and they decide to throw literally everything their destroyer has at the alien ship. They launch every missile, they got all the dudes on machine guns, and our bad boy and his Japanese buddy are on the bow with 50 cal rifles for absolutely no good reason except for that it is fucking awesome.

But the real star of this movie, the real reason you came to see it, is the titular battleship, the USS Missouri, BB-63, the Mighty Mo’ herself. Here is another sincere, deeply held belief of mine: the Iowa-class battleships are the most beautiful thing mankind has ever created. The four sister ships are the largest and most powerful warships to ever float (that survived the war anyways) and represent the pinnacle of warship design in the final glorious age of that artform. Those babies got curves. Left without other options, our ragtag crew decide to try to bring her back to life and go head to head with the aliens once again.

And thus kicks off the greatest 10 minutes of cinematic history to the tune of “Thunderstruck” by AC/DC, itself perhaps the finest accompaniment possible to the seagoing splendor of this film. The crew has a problem: they have no idea how to drive the Mighty Mo’. But no worries! Out of the woodwork come the original crew of the battleship. There is a whole scene where old, proud men with even older and prouder mustaches appear in mankind’s greatest moment of need to take the old but gallant girl out of retirement to face battle one more time.

I cannot stress enough that I am being 100% honest here, but the whole scene where they bring the ship back to life gives me tingles every time I watch it. It’s so magnificent. The enginerooms on steamships always get me hot and bothered anyways, but watching, even in CGI, an Iowa-class battleship get the fires in her heart lit once more very nearly brings tears to my eyes. And to watch the bow crash through the waves on her way to her sacred duty one last time would be a sight I would do anything to see for real if I could.

A brief interlude here to emphasize this movie has everything. I love the battleship most of all but there is a whole storyline that happens on land, and that storyline is badass. On the ship, they needed a five inch cannon to take out one of the aliens. Our double-amputee friend though, he just straight up tackles one of the dudes. He goes toe to toe with a huge armored alien and he doesn’t even have any toes. He’s an Army dude so that’s points against him but still man, respect.

But back to the battleship. I love the movie Casablanca. Play it Sam, play as “Time Goes By.” We’ll always have Paris. Here’s looking at you kid. Fantastic. But at no point in Casablanca do they powerslide a freakin’ Iowa-class warship and then fire a broadside at an alien spaceship. I mean holy shit. It’s Tokyo Drift but with 57000 long tons. Show me another movie that powerslides an Iowa-class battleship and I’ll show you another movie that has even half a chance at beating this one as the greatest of all time.

And just look at that broadside in action. I’m only giving you seconds-long chunks of these scenes, and all silent. It goes on for ten minutes or more, just non-stop battleship action. I could run the thesaurus dry and not have the words to convey it to you. You have to watch it.

Even the old dudes get in on the action! In Marine Week, we were taught to hold a machine gun burst for the amount of time it takes you say “Die Motherfucker Die.” These old dudes 100% ignore that advice and fuckin’ get some when it comes to shooting aliens. The ship is already launching full broadsides of 16″ rounds at these aliens and they’re still firing 50 cal machine guns I think mostly for funsies. Amazing. Fantastic. World-class.

The only major mark against the movie though frankly is right at the end. After all this SWOtivating battle action, after our blackshoe friends do all the hard work and kill 90% of the aliens and knock down the force field that was keeping the rest of the Navy at bay, some freakin’ pilots swoop in and act like they actually contributed. Terrible. Pilots. Ugh.

So that’s the movie Battleship. It’s so fantastic. It’s everything you could possibly want in a movie. It’s got romance. It’s got intrigue. It’s got the Navy’s finest warships going head to head with an advanced alien race and kicking their fucking asses by virtue of being total badasses. I love this movie. Please spread my gospel.