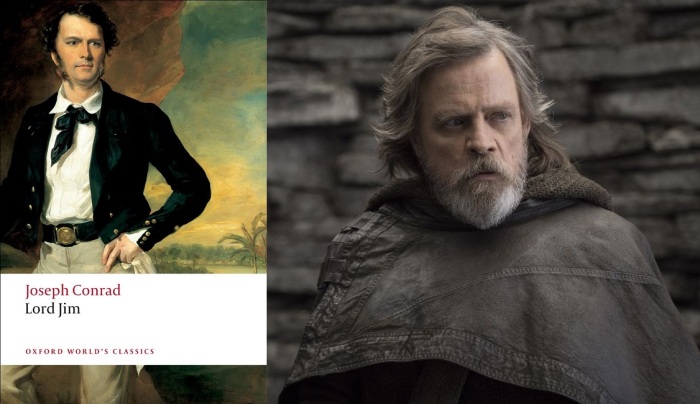 So this post is about both Lord Jim and Star Wars: The Last Jedi. I read Lord Jim in the Peace Corps and only came across it because it was free for Kindle on Amazon. I found the novel to be very powerful and it resonated with me on a personal level. It follows Jim, in Joseph Conrad’s “dude telling a story is the story” style, who we meet as he is first mate on the Patna, a steamship carrying Muslims on the Hajj. After the ship strikes an underwater object and appears ready to sink, Jim abandons ship with the other crewmembers, leaving the passengers to their fate. Once they reach port, the other crewmembers run away, but Jim faces a trial for his and their actions. After this he spends a great deal of time running away from anyone who might even have heard of him, before finding some level of glory on a remote island.

What made this book stick with me was the nature of Jim’s failure. Most of the failure I think you’ll find written about or shown in movies is just not reaching a goal. The hero tries really really hard but just can’t make it. They run as fast as they can but don’t make the touchdown, or fight as hard as they can but just don’t beat the bad guy. This is a relatable and blameless sort of failure. Maybe you studied really hard and tried to write the best admission essay possible but you just didn’t get into that dream school. So you failed, but as long as you put in the best effort possible that failure isn’t really your fault.

But Jim’s failure in Lord Jim is of a whole different sort. Jim is a relatively experienced seaman serving as an officer onboard a ship carrying passengers who’s life he is responsible for. When the ship appears ready to sink, he wants to load the passengers onto lifeboats and do what he can to save them. If he can’t save them, he knows it is his duty to die trying. But meanwhile the rest of the crew is abandoning ship, and doing it as quietly as possible so the passengers don’t panic, rush the lifeboats, and keep the crew from saving themselves. Jim teeters on the edge of this decision, standing dumbstruck as he watches the rest of the crew put the lifeboat to sea. Finally, at the last possible second, Jim jumps into the lifeboat and saves himself, leaving the passengers (so he thinks) to die.

This is a radically different version of failure. Jim knew what the right answer was, knew what his duty was, and instead chose the wrong answer aware the whole time that it was the wrong answer. It’s not that Jim just didn’t try hard enough, it’s not that Jim made a sincere effort and just made a mistake, it’s not that Jim made what he thought was the right decision that later turned out to be wrong, it’s that Jim leapt into that lifeboat knowing the whole time he was abandoning his duty. And while Jim faces his failure with honor in the courtroom, he afterward runs from every port he lands in as soon as he hears his failures are catching up to him.

Which brings me to The Last Jedi. One of the big criticisms of the movie was the character arc of Luke Skywalker. People didn’t want to believe that the young man so full of hope that takes down the Empire in the first three movies could turn into a bitter old man by The Last Jedi. But man when I saw that movie I got it. This Esquire article tries to explain Luke’s exile as some sort of enlightened pacifism, but that’s not it. The only reason Luke could fall so far is because he used to be that young man full of hope and righteousness. In Luke’s flashbacks we learn that the moment of his fall was when he came into Ben Solo’s room with the intent to kill the future Kylo Ren because Luke feared what Ben could become. Luke suffered the same failure that Jim did. Luke’s failure wasn’t that he didn’t try hard enough when training Ben, or that he didn’t kill Ben when he had the chance, Luke’s story is that he chose the wrong answer despite knowing it was wrong. Luke knew that killing Ben was wrong and evil, but chose to do so anyways. He stopped himself before he committed the act, but it was too late and Ben had seen his mentor betray him. Luke knew he had failed and couldn’t look himself in the mirror let alone face anyone else.

I understood both these characters because I had been there. At the Naval Academy and throughout the Navy they teach you integrity is the most important thing. We do trainings on trainings on trainings. We talk about it all the time, discuss scenarios. I was so tired of integrity trainings that I joked that you can only become so integreful, and I should be exempt because I was at maximum integrity (you can’t tell the truth more than 100% of the time). But then one day I was standing as a duty officer and I lied. I thought I had a good reason (and I learned everyone always thinks they do), but I knew it was wrong. And when I got caught and had to face my failure I couldn’t. You have a whole image of yourself and what kind of person you are but when it is put to the test you find out what you’re really made of. When Luke failed he sent himself into exile on Ahch-To. Jim ran away from any port that had even heard of his actions. I spent two years in Zambia.

Jim is saved because he winds up in the remote village of Patusan. Alone and just forced to be the best man he can be, free of anyone who might have heard of his past failures, he finds success and courage. The next time he has to decide to run or to do the right thing, he chooses the correct path. Luke is saved because Rey shows up. When he tells her of his failures, she just doesn’t care. She knows the kind of man Luke is and can be, and that’s all she demands of him. So that’s what he winds up giving. If audiences don’t understand these characters, I think it is because they have never really had to face failure the way these characters have had to. Theirs isn’t a failure of effort but a failure between them and the very nature of their being. Finding yourself after a failure like that is a deeper arc then just running a bit faster or fighting a bit harder.