Drawing a map of their community.

This past week I helped out with Camp GLOW. GLOW stands for Girls Leading Our World, and is a camp designed especially for girls. It is an amazing program and I am really glad I got to bring two girls to the camp.

The focus of Camp GLOW is on female empowerment and health. The camp serves to overcome two shortcomings faced by a lot of girls in these communities. First is the lack of opportunities for girls and the lack of empowerment for women. Women in a lot of cases are expected to fall into certain traditional roles, becoming wives and mothers at sometimes a very young age. The camp tries to teach girls that they can spend time focusing on themselves, finishing their education and deciding their own future before getting married and having kids if they so choose. The camp also teaches girls about health. Most girls (or people really) in Zambia don’t get a comprehensive health education, especially relating to topics like HIV and STIs. So the camp spends some time talking to girls about reproductive health, family planning methods, and ways to prevent HIV and STIs. A big focus there is teaching girls how to get what they want out of a relationship and negotiate things like condom use during sex. So overall it is a really great program.

A garden at the location we had Camp GLOW; I was excited about it because I was the only agriculture volunteer there and it was super nice. The lake is in the background.

The sessions were a mix of different things. For some of the sessions, we did activities from Grassroots Soccer. These activities use soccer-type games to teach a lesson. One of the games we played was “risk factors,” where cones represent different risk factors for getting HIV, like unprotected sex or mixing sex with alcohol. The girls dribble a ball around the cones and if they hit a cone, that is like doing one of those risk factors. At first, if the girls hit a cone they have to do a pushup, but as the activity progresses soon all the girls have to do pushups if one girl hits a cone. That drives home the effect that HIV has on the community.

We also did a variety of classroom sessions. The girls were very studious during all of these, and would copy notes from our flip charts after the sessions were over. They were all very excited to go home and teach their friends about the things they learned. There were also a variety of girls only sessions, where the male PCVs left to give the girls an all girl environment. From what I heard, these sessions were very interactive and gave the girls a chance to ask a lot of otherwise embarrassing questions they otherwise wouldn’t get a chance to ask or would be too scared to ask. 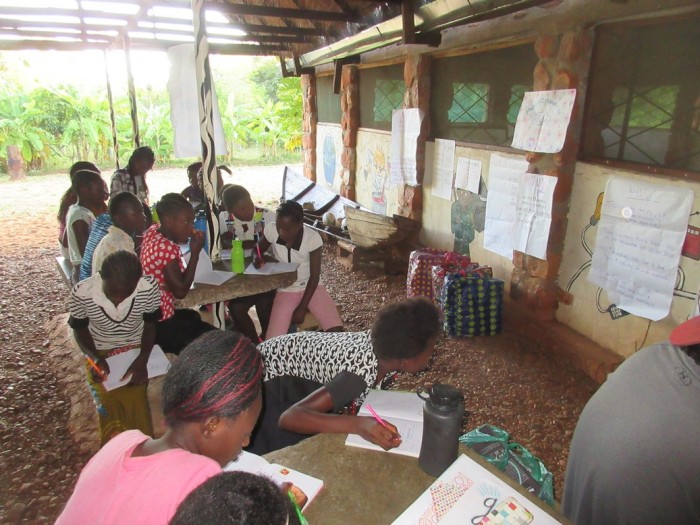 The camp also included a few different purely fun activities. On two nights we had bonfires and on one night we roasted marshmallows. I got to build the fires so I was pretty excited about that. The girls enjoyed the s’mores though let me tell ya if campers ever compare notes Americans will quickly get a reputation for being obsessed with s’mores. Not the worse national trait. The girls also had a lot of time to play netball and swim like I said before.

I made a really hot fire which actually isn’t great for marshmallows but I had fun and that’s what counts, right?

Overall it was a really fantastic week and the girls had a lot of fun and I think got a lot out of it. The camp is also supposed to be a lead-in to a weekly GLOW Club in each community, so I’ll see about starting one. At the very least, two girls from my community got to learn some stuff and hopefully they’ll teach their friends what they learned to really spread it around. One story I really liked is that one of the women that helped lead the course was a GLOW girl herself 10 years ago which inspired her to be part of an organization that helps teach more girls about health and HIV. There’s sustainable development for you.