After an excellent night’s sleep in Saipan, I was out the door the next morning at 7:30 to explore the island. Since I only really had Saturday to see much of anything, I headed out that early to make sure I saw it all. I probably could have slept in a little later. Leaving town, I hung a left and headed north towards Banzai Cliff and eventually the Grotto. From my various tourist maps obtained from the car rental place and the hotel, I surmised that if I just kept driving north I would find Banzai Cliff. Neither of the maps I managed to pick up were in English, so I had to just take my best guess based on the pictures. The first place I came across was Last Command Post Park. It is not hard to find, as it is right next to the road and beneath a towering cliff.

I noticed the cliffs first, which isn’t really an impressive feat of observation. These things are massive and rise nearly strait up 650 feet out of a strip of jungle at their base. We don’t have anything like them on Guam. The other major contrast from Guam is that I noticed all sorts of birds flying around. Due to the brown tree snake infestation, Guam has been de-birded, leading to the famed spider infestation. There are still some birds on Guam, but unless you count roosters wondering around listening to bird song isn’t really a thing. The pleasantness of the bird song was contrasted sharply, however, by all the trash littering the Last Command Post Park. I don’t know how regularly the place is cleaned, so maybe I caught it at a bad time, but the place had those tourist coconut drinks all over the place. Clearly more than one bus full of tourists had been dropped off here after coming from the beach and decided that “anywhere” was an appropriate place to deposit their finished coconut, straw and all. Beyond the trash, the park was perfectly pleasant and about what you would expect. The signs weren’t too explanatory, but you could walk into what I assumed was the eponymous command post. It was at this point a bit of a fixer-upper, but you could tell at one point it was a fairly fortified place and would have been imposing to attack. Also around the park, in various late stages of rust and decay, were all the usual examples of military hardware including a torpedo, a small tank, and antiaircraft guns. Exciting stuff for students of corrosion.

For those of you looking to enter a new field, you could probably make a comfortable career for yourself by moving to Saipan and setting up a peace memorial construction company, if Last Command Post Park is anything to judge by. There were examples from at least Japan, Korea, and Okinawa. I had the place to myself early on a lovely Saturday, and they were therefore in fact quite peaceful.

I managed to find Banzai Cliff, but only because curiosity sent me down a random side road. If you’re coming from Garapan, Banzai Cliff is a left turn across from Last Command Post Park. As I alluded to in Saipan Part I, I think most people are familiar with Saipan as that place where many Japanese committed suicide in the face on the oncoming American invasion. According to the museum I visited on Sunday, the Japanese had spread propaganda among their population on Saipan that the Americans would commit atrocities to the Japanese population if the invasion was successful. Instead of face that, many Japanese chose to take their own lives both at Banzai Cliff and Suicide Cliff. Suicide Cliff was the cliff that buttresses the Last Command Post, and Banzai Cliff ends in the Pacific Ocean at the north side of the island. To take a step back before I tell you about the place itself, my major thought that calling the place “Banzai Cliff” is probably a bit insensitive in the first place, and that putting a sign that in all caps says “WELCOME TO BANZAI CLIFF” is jarring. According to the aforementioned museum, enough people committed suicide from Banzai Cliff to impede boat traffic, bodies were so thick in the water. But, you know, welcome! My other impression of the place is that there were less beautiful places to end it all.

The location is beautiful. There is no reef around this portion of the island, so a sheer cliff drops into the deep, royal blue of the Pacific Ocean. It was windy the day I visited, and that was kicking up waves which were crashing all along the cliff. When the waves hit at the right angle a geyser of water would shoot out of a cave to my right, sending water into the sky and reminding you of the power of the ocean in front of you. The view is nothing but unbroken Pacific Ocean and gorgeous Western Pacific sky. The deepest parts of the Pacific Ocean lie off the Marianas Islands and if you contemplate that, it makes it all the more magnificent that these islands rise out of those depths. Given its history, Banzai Cliff is lined with small shrines and memorials, and with those in the background the location is a powerful if not peaceful spot to sit and think for a while. Or fish, as one dude I spotted as I was leaving was doing. I don’t know if he caught anything. 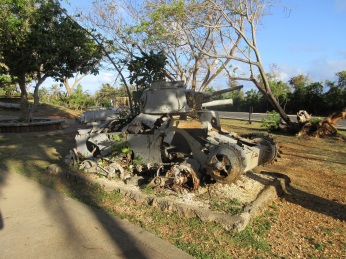