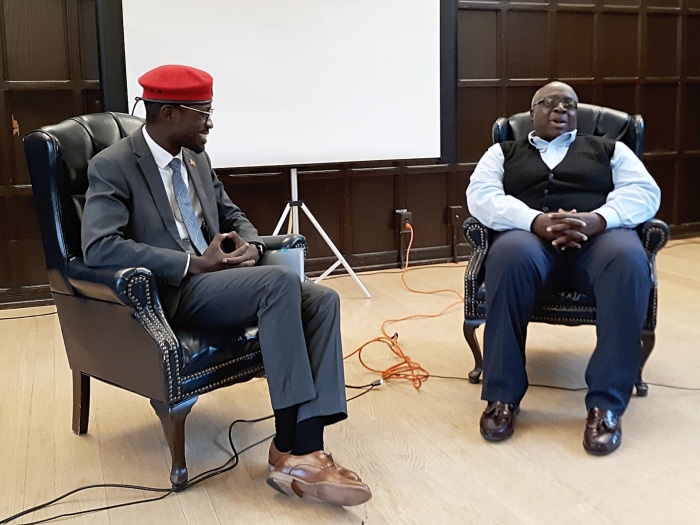 I saw Bobi Wine on Friday (you can watch videos of the talk here and here). This was an interesting experience because no one knew who he was. If you didn’t click on the link, Bobi Wine is the Ugandan opposition leader. That sort of position puts him in the midst of all the usual controversies in struggles over power and politics, which I won’t bother to comment on because I’m in no position to have a particularly educated opinion. But I at least knew who he was!

It was kinda tough to find out about the event. I suppose Wine there is only the opposition leader, but when Yale invited the presidents of Senegal and Sierra Leone to campus, these were known events and showed up in newsletters and the like. Bobi there was invited by the African American Studies group. I’m wondering if they kinda regretted it, because Bobi has in the past advocated for violence against the LGBT community, and has never really come around to full support of LGBT rights. During the talk, both the moderator and another friend of mine pressed Bobi on his stances around this issue, and frankly he gave a very politician-y answer. He talked about supporting the rights of all citizens but never quite said he supported the rights of Uganda’s LGBT citizens.

One answer I did particularly like of his was when one person asked him if he was going to commit to not becoming another Museveni and hold onto power for 35 years once he got it. Bobi said, in essence, that it wasn’t on him to promise not to hold onto power. Instead, preventing another Museveni was about empowering the people and empowering institutions. That’s an answer I thought made a lot of sense; you can’t put all your hopes in just the person itself, but in the position.

But that’s not really what I wanted to talk about. Except for the people at the talk, no one knew who Bobi Wine was. Before the event I asked people if they were going to see Bobi Wine speak. “Who?” “The Ugandan opposition leader.” “Oh.” They had never heard of him. I was no expert on Ugandan politics but I had at least heard of the man. I knew what red hats meant. I couldn’t believe that no one was even dimly aware of who Bobi Wine was. My friend and I showed up to the event 15 minutes early and we were the first ones. The turnout wound up being pretty good, because Yale people like to show up about two minutes late to everything, but still people weren’t exactly knocking down the doors to see a central figure in East African politics. I’ve started to recognize the people that show up to “Africa” things at Yale, and it’s always the same small crowd.

This is just another symptom of what everyone who cares about Africa knows: that the community of people who care about Africa outside of Africa is very tiny. This blows my mind. People give a whole lot of shits about China and the Middle East. But the interesting frontiers of China’s impact on the world aren’t happening inside China, they’re happening in places like Africa where China is having real effects on the ground. If you care about China you should care about Africa, and South America, and the rest of the Global South where China is working to increase its influence while at the same time the US and Europe are pulling away. Bobi Wine was on the Yale campus and every single person who cared about that fit into a not particularly large meeting room. That’s kinda crazy.