This past weekend (as I’m writing this, anyway) we went to the Southern Maryland Celtic Festival. “We” was my dad, my brother, and me. My family are avowed Renaissance Festival and Celtic Festival enthusiasts. We knitted an entire chainmail hauberk once. Dad regularly wears a great kilt at every opportunity. My brother just earned a degree in Irish Studies from the University of Dublin. All that to say is that whenever a Celtic festival is to be had, we tend to be at it.

We arrived in time for the opening ceremonies. These were a sight to see. They started with a march-on of all the clans and historic reenactors. This translated into a long line of slightly bedraggled-looking people in period or modern garments walking around a field. They approached their task with enthusiasm, and my favorite were three men dressed for the Anglo-Zulu War (as far as I could tell). Since it was a Celtic festival, they were dressed as one of the Highland regiments, which translated into one fat dude in a skirt, one old dude in plaid pants, and a third dude with a mustache and spats.

After the march-on of the clans came the bagpipes. I am a fan of bagpipe music; I own several bagpipe albums. So it is with much sincerity when I say that I love the part of every tattoo or Celtic festival where they bring all the pipe bands out at once and they all play together. It has some terribly romantic name that escapes me right now, but the notion is basically “alright, instead of stringing this out, let’s just put all the bagpipes together and get this over with.” The Naval Academy’s Pipes & Drums were playing there that day, so that was nice to see.

With all that done, it was time for lunch. I, of course, had the haggis and fries. Haggis is delicious, it turns out, with Old Bay on it, though that really should have been obvious in the first place. The other wonderful part of Celtic festivals, besides being able to get haggis, is that you can drink IRN-BRU. IRN-BRU is phenomenal, as the ads will tell you. This drink is magical. It is not, as the bottle will tell you, a significant source of iron. Since it is a soda, it is also not a significant source of bru, so I have no idea why they call it IRN-BRU. But when you open it up and take a whiff, it smells like pink bubble gum. When you drink it the flavor is orange cinnamon. I don’t know how they do it. I first drank IRN-BRU in Scotland and loved it, but it is nearly impossible to get in the States, so it is a treat at Celtic festivals. You got to get it.

The real excitement at the festival, however, is the Highland games. I love the concept of these games, which very clearly is “we’re big burly dudes, let’s get together and throw things.” Caber tossing is of course the flashiest of the events. This is the one with the log. For years I had enjoyed watching caber tossing, and then one day one of my friends asked me how it was scored. I had no idea; I was just there to watch people throw logs end-over-end. Lately I’ve become more a fan of the sheaf tossing and weight over the bar (a name which demonstrates the extent of creativity in these events). Sheaf tossing (where they take a hay-filled sack and use a pitchfork to toss it over a bar) just seems downright silly to me, even among the Highland games. Weight over the bar has the same appeal as pole jumping at a track meet: exciting to watch and easy to judge.

The exciting competition at the Southern Maryland Celtic Festival this year was the hammer toss. Standing out from the pack in the lightweight division (under 200 pounds, “lightweight” being relative here) were two athletes, one German and one American. They were head to head throughout the day and at the end of it all it the hammer throw and the whole competition was down to the final two tosses. Our German friend stepped up and in two swings around the head managed to lob the 22 pound hammer 76′ and set the day’s record so far. Our stateside friend, dressed in a Captain America shirt (and kilt), stepped up to the bar and picked up the hammer. He swung it once around his head, twice, and then on the third time the hammer head swung off and nearly annihilated a small dog in the crowd (no animals were harmed in the making of this blog post, except for the haggis). This lead to some panic on the court but eventually it was decided that the hammer would be replaced and only the American would throw again. Usually, the announcer told us, if a hammer breaks the entire round is scrubbed. But the American picked up the hammer, put all his might into it, and only managed to lob it 73′. So the Highland games went to a German. Aw well.

Unfortunately for Scottish-American pride but fortunately for our tired feet, that wrapped up the day and we headed off. Without a scrap of self-consciousness dad took us all into Applebee’s for dinner wearing his kilt. They didn’t serve haggis. But if you’re ever in southern Maryland in April, take a swing by the Southern Maryland Celtic Festival. Come for the IRN-BRU, stay for the hammer throw. 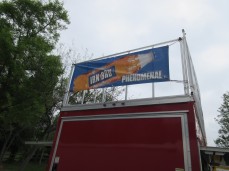 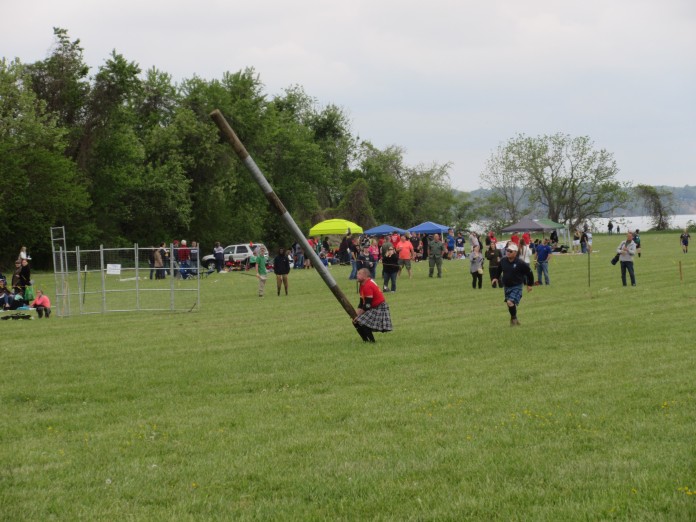