On the way north, dad decided to have us stop for the night in Kabwe. Kabwe has several claims to fame, among them being one of the most polluted places in the world (thanks to decades of lead mining) and the site of the discovery of the Broken Hill Man. It was always my family’s first (sorta) taste of up-country living.

We got to Kabwe in pretty good order, having switched from driving one giant van to two smaller 4x4s. They were far more nimble and capable, but since we had only two registered drivers (my uncle and my dad) somewhat less convenient in that regards. Which, really, is why we stopped in Kabwe; so we could break up the northbound driving. 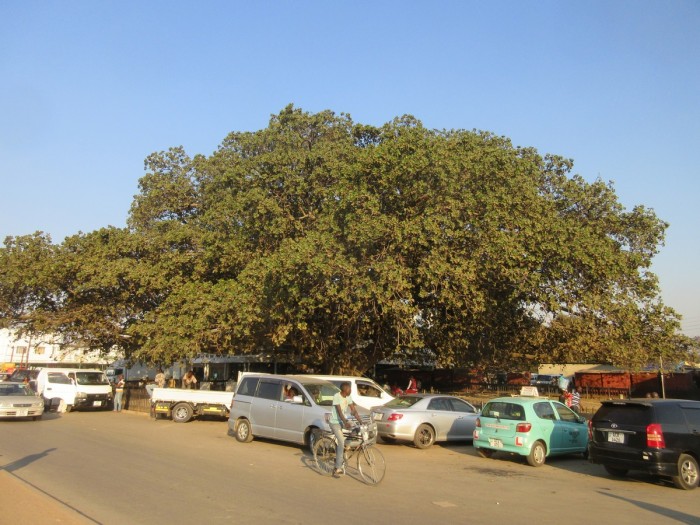 The first thing I wanted to do in Kabwe was to go see the Big Tree. It is Kabwe’s other claim to fame. Seeing this sucker was a bit of a headache for me. First, my family asked if it was in walking distance of the lodge. I said yes, but I guess my current version of walking distance has increased somewhat from where it used to be. The second thing is that my family expected me to like, know exactly where it was. I hadn’t quite gotten across to the family yet that things like maps aren’t necessarily the most reliable here, and even big important things like Big Trees aren’t necessarily well marked. But after wandering only a little bit through Kabwe, we found it.

So we poked around a bit, and my family took a whole bunch of pictures of the locals using the tree as a meeting place, the same that people have done for hundreds of years. So that is pretty cool I guess. After looking at the tree and buying a coke nearby, it was off to see the monument to the Broken Hill Man

Zambia has been working hard for a while now to get back the skull of the Broken Hill Man (it currently rests in the Natural History Museum in London). In the meantime though, they have erected a lovely little monument on the grounds of the Civic Center, which is a few blocks up the street (like, literally go uphill) from the Big Tree. Kabwe is rather convenient for getting all your Kabwe siteseeing in at once.

After reading the plaque on the monument, and poking around for a bit, the family did some grocery shopping at the nearby ShopRite and departed in a taxi for the lodge. Since the taxi was full of all them, that left me to walk back to the lodge by myself. Frankly, it was a pretty nice little respite.