The highlight of a trip to Livingstone is, of course, Victoria Falls. We managed to get there on I think day three of our Livingstone adventure, because riding an elephant was farther up on the priority list.

All around the falls are a variety of trails that you can follow to get different vantage points of the falls. Since I was most excited to see the falls in all their glory, as it were, I dragged us along the knife-edge trail first. All the trails are paved and easily accessible, except for maybe some stairs. So you head off down the trail and the you turn the corner and there are the falls.

We went when the water was low, so I guess they could have been even more impressive, but man they were amazing. Just a giant sheer drop cascading into a whirling vortex below. And it is incredibly long so as you walk along the knife-edge trail it just keeps going. The falls, um, fall into the first gorge in a series of seven gorges. Knife-edge is the spit of land on the Zambia side between gorge #1 and gorge #2, so you get incredible un-blocked views of the falls and as you keep going you just get more and more falls. Eventually you reach the edge of the knife-edge and on your right are the falls and on your left the Victoria Falls bridge.

The next trail we hiked down was the one that lead to Boiling Pot. Boiling Pot is where the river spills from the first gorge into the second, and is home to Nyaminyami. Nyaminyami is the river god that controls the Zambezi from the falls to Lake Kariba. His domain used to extend beyond that until they built the dam that created the lake. It was cool to see the home of a god. Down at the edge of Boiling Pot you can feel the power of the river and look up to see people bungee-jumping from the Victoria Falls Bridge. The path down there is pretty beautiful, being a lush forest and all. It is made slightly trecherous, however, by the number of baboons that live on the trail. They are entirely unafraid of humans, and while occasionally cute to look at, they stole my girlfriend’s soda right out of her hand: 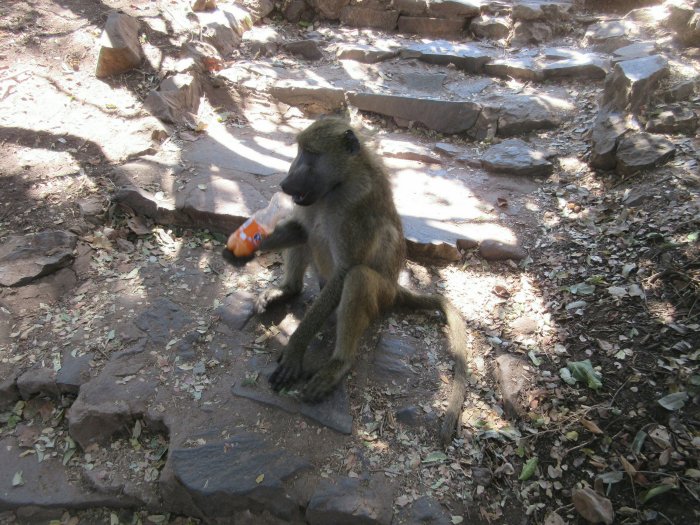 After ascending back from Boiling Pot, we went over to the top of the falls. We didn’t go out into the river, because you’re supposed to have a guide to do that and we were pretty beat anyways. Then we walked along the trail to the bridge, which offers more stunning views of the falls and Boiling Pot, if from slightly farther away.

We probably spent about 6 hours hiking all around the falls and were pretty spent from the walking and from the utter insane natural beauty of the place. Time to get my butt to the rest of the natural wonders of the world.

Engine Number 955, built 1892. First owned by Cape Government Railways and was among the first batch of the 7th class purchased by CGR. Purchased by Zambezi Saw Mills in 1966. It is the oldest steam locomotive still existing in Zambia. Reading this Week:

After the Livingstone Museum, the second museum I dragged us to was the Railway Museum. This museum is juuuuust on the outskirts of Livingstone and while you could walk it was easy enough to take a cab. The museum is mostly centered around the history of the Zambezi Lumber company, who quickly expanded into the railroad business as a method of transporting their lumber. It features a wide range of trains from throughout the country’s history, and that day featured me being all excited and taking pictures of trains, and pretending to drive one:

I do love me a good steam plant. My girlfriend and I were 50% of the total tourist population that we saw there that day, so you can get yourself plenty of alone time with the trains. Included in the admission fee is also a guided tour. He takes you all around to look at the different trains and the history of the Zambezi Saw Mill, so that is pretty nice. The museum also features the Jewish Museum, which is a history of Jewish people in Zambia, as you might have guessed. I didn’t know it was there before we went, so that was a pleasant surprise. It was very recently installed and is very well done, and traces notable Jewish people and families of Zambia.

In front of a Chipmunk, a plane used to train the Zambian Air Force in the early days.

After IST, I departed down to Livingstone for a debatably earned vacation with my girlfriend. Livingstone is, of course, famous as the location of Victoria Falls (perhaps vice-versa), but the first thing I dragged us to was the museums. 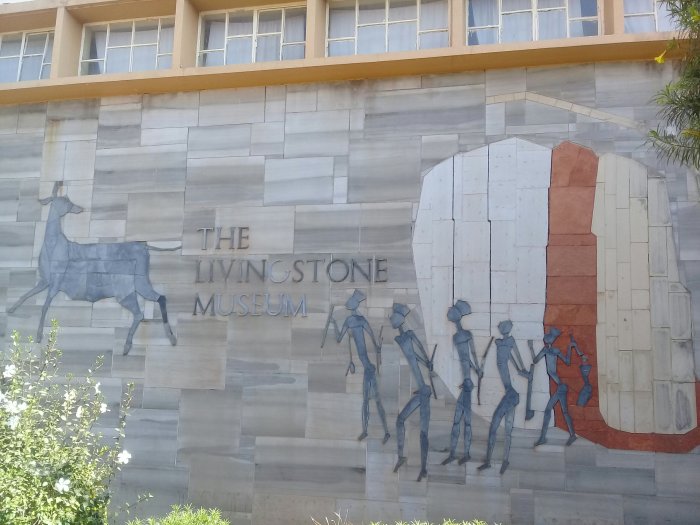 The most amazing part of the museum was the small room dedicated to ole’ David Livingstone. It had a variety of original artifacts, such as his cloak and his writing box. It also featured his original letters that you could look at. So that was really cool to see the things connected to a guy that had such an impact on the future of the African continent, for better or for worse.

All in all, if you’re in Livingstone I can’t recommend the Livingstone Museum enough. It’s close to everything, by the sheer nature of Livingstone, and if you’re a Zambian resident it is well worth the like K15 it took to get in there. Lots of background on Zambia as a nation if you haven’t seen that stuff before, and I think it is the only place you are going to see a lot of relics of the pre- and early colonial eras. 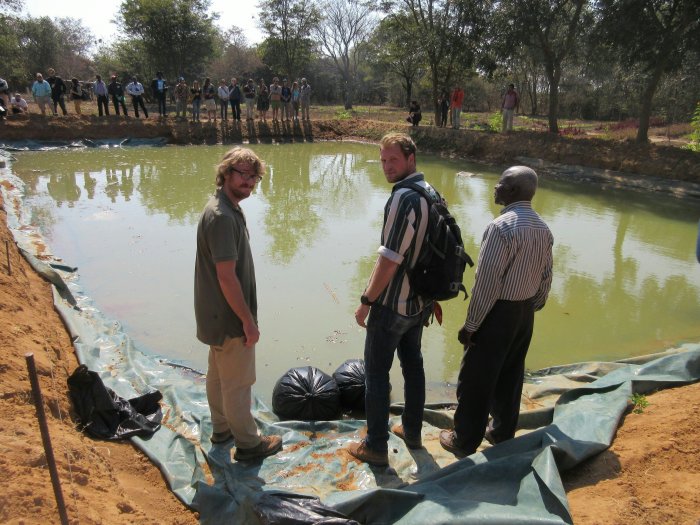 Stocking fingerlings at an organic farm.

IST stands for Inter-Service Training (I think). It is a two week training that is conducted after community entry, and it is split into two parts. For us, the first week was PDM, or Project Design & Management, and the second week was about HIV.

IST was a pretty good experience. I saw all of the RAP intake that is in Northern and Muchinga during Provs, but this was the first time I saw everyone else since we all departed ways during swear-in, and will be the last time we’re all together until Mid-Service Training in about 8 months.

The first week, like I said, was PDM. That was a bit of a misnomer, because I don’t think at any point we Designed or Managed Projects. The first three days it was just PCVs, and we talked about what we had done at our sites and what we had seen and stuff like that, along with a few riveting presentations on things like emotional fortitude. Emotional fortitude is, apparently, important. The last two days of the week we had Zambian counterparts attend with us. My counterpart was the only other fish farmer in the village besides my host dad, and is a fairly influential guy here.

These two days of PDM, with our counterparts in attendance, were a little more useful I thought because we saw more things. We had presentations on a variety of potential projects that we could undertake in the village, like beekeeping or rice production. The presentations were all a little too short to actually learn much, but I am hoping that my counterpart saw at least one or two things that he would be interested in starting here. He’s already spoken to me about compost; the average Zambian farmer spends a lot of time thinking about fertilizer, so anything that reduces their dependance on that rather expensive aspect of farming piques their interest.

The Friday of PDM week we took a field trip to an organic farm nearby Lusaka. That was interesting, not the least because they had extremely cute dogs:

The farm specialized in sustainable farming techniques, and the farmer that ran the place also had a large section of forest that he had re-grown. The forest was useful to him because it provided a great deal of inputs towards his fish pond and compost, as well as a place to keep his bee hives.

The second week of IST was about HIV. That week was not as useful to me because my counterpart was a no-show. The other counterparts seemed to get a good chunk out of it though. The week wasn’t so much focused on the actual disease itself, but things like positive living and the factors in Zambia that make HIV so prevalent.

Overall IST was pretty awesome. It was a great chance to see everyone again and to catch up on our experiences in the village. It was nice to be in Lusaka and be able to go to restaurants and the like, though I was excited for it to be over because my next stop was vacation in Livingstone.